By continuing to use this site, you agree to the use of cookies. Cookies are used to suggest information based on your browsing patterns and to provide us with information about site usage. For more information and to manage these settings, click here
Home > News > The health situation of a country in transition

The health situation of a country in transition 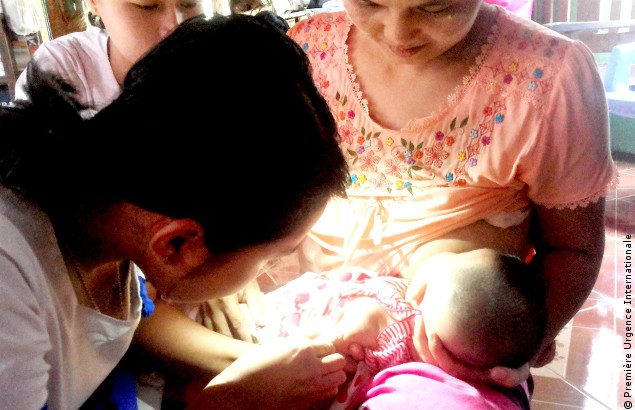 Why intervene in Myanmar?

Since summer 2011, Myanmar has started a process of political, social and economic transition to overcome a dominant military regime. Its health system had so far suffered from under-investment and unequal distribution of available resources for the benefit of certain geographical or thematic areas. This has led to poor health infrastructure, inadequate and low-skilled human resources, high costs, poor and disparate quality of health service.

In order to support this democratic process and to overcome the difficulties mentioned, Première Urgence Internationale is supporting the country to implement a more qualitative and egalitarian health coverage. This shift is helping to improve health services for children under 5, pregnant women and populations particularly vulnerable to tuberculosis, HIV / AIDS and malaria. It is in particular the commitment made by the French government through the Global Fund and the 5% initiative that were mobilised to reduce mortality related to these diseases.

Why intervene with these populations?

Access to care is still uneven and some populations are particularly affected. That is why today our approach is centred on community awareness and support for civil society initiatives. Our mission is twofold. On the one hand, strengthen access to treatment and expand HIV / AIDS prevention services of therapy centres. On the other hand, help reduce the stigma, discrimination and discontinuity of medical follow-up of patients by supporting the structuring and networking of civil society organisations.

Concretely, what does it mean?

In order to fight against discrimination and the denial of access to care for some particularly vulnerable populations, Première Urgence Internationale focuses its activities around an awareness campaign on HIV / AIDS and sexually transmitted diseases. In order to increase the positive effects of these awareness campaigns, our activities focus on so-called “key” populations.

Indeed, the risk of infection or being already contaminated is particularly high for men who have sex with men (regardless of their sexual preference), sex workers, injecting drug users and migrants. These key populations are strongly discriminated against when it comes to accessing health care. Particularly exposed, the risk of infection is up to 50 times higher than in the general population.

To reach effectively these discriminated and inaccessible populations, the prevention team carries out a “social mapping” and organises precise follow-up of the patients. Through “peers”, the teams will identify areas where key populations gather and where positive patients usually socialise. Then, they will be able to promote and carry out screening tests and raise awareness about health. This job is complicated and sensitive. That is why these activities are based on what we call “peers“. “Peers” are positive volunteers or people with links to “key” populations who have a perfect knowledge of the area, the populations concerned and the problems encountered.

Could you tell us more about these ‘peers’?

As the word suggests, peer support is a social initiative provided by a peer, a person who is similar in fundamental ways to the recipient of the support. A “peer” is able to offer support based on his or her experience and can relate to others who are now in a similar situation. Solidarity is what drives these people to help organisations like Première Urgence Internationale. It is a very important concept in this community.

In our HIV / Aids prevention team, some of them live with the same status and have sometimes lived in the same critical conditions as their audience. They understand each other and that is why there is no discrimination between them. Peers have an enthusiasm without equal in solving patients’ problems. To help them in their personal journey but also in their valuable work, Première Urgence Internationale trains them in psychosocial support and promotes the participation and networking of many self-help groups.

The Ministry of Health and Sports has announced, yesterday (11/01) that it will ensure that health care is provided equally to people living in Rakhine State without discrimination based on race, religion, gender or citizenship. To know more, see :