By continuing to use this site, you agree to the use of cookies. Cookies are used to suggest information based on your browsing patterns and to provide us with information about site usage. For more information and to manage these settings, click here
Home > News > How to talk about HIV/AIDS in Myanmar

How to talk about HIV/AIDS in Myanmar

After 15 years of management of health facilities, Première Urgence Internationale is changing the model of its project to fight against HIV/AIDS in Myanmar. 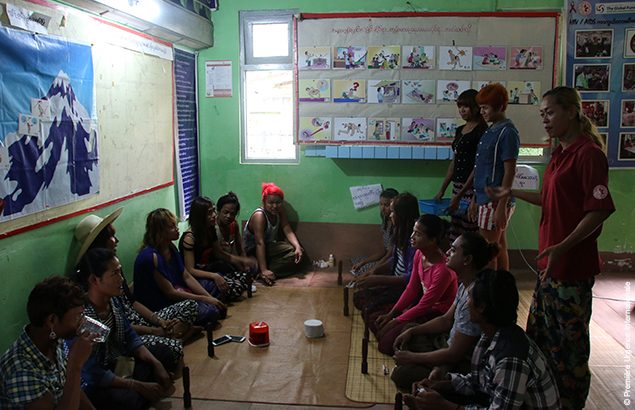 Myanmar has the second-highest number of HIV-positive people in Southeast Asia, after Thailand, with 220 000 people living with HIV.

Groups that are along the most likely to be infected with HIV are:

In Myanmar, the National Aids Programme (Nap) puts the number Men having Sex with Men at less than 0.5% of the population: 240,000 of an estimated 60 million people. Fewer than 30% of them have received HIV prevention services.

The birth of a community based approach

After 15 years of management of health facilities, Première Urgence Internationale is changing the model of his project in Myanmar, by transforming its existing prevention activities.

One day in Myanmar, Irma, Première Urgence Internationale medical coordinator, asked a patient that had left the prevention meetings that the NGO organised in the medical center, the reason why he did not want to come anymore. He answered that when he came to these seminars he felt “dirty” and he felt under pressure.

“Therefore, we started to think about change our approach on education“, tells Irma.

Until these days, in fact, the team proposed an educational meeting with a professional midwife. However, the team realized that some participants bewared of our midwife, because they perceived her too unlike and, consequently, they did not feel understood. At this point, we thought to propose to someone else to give the talk: a sex worker, under the supervision of the midwife, took the role of a “teacher” during the meeting. “I remembered the midwife, embarrassed, telling me – I can’t translate what she’s saying -”, explains Irma, smiling. “She was talking about how to force clients to use condoms, but she was speaking ‘their language’.

That is, in this way, the Myanmar project has changed”, explains Irma.

A revolution that comes from the humble, from the change of the educational approach, from switching a midwife with a “peer volunteer”.

Who is a “peer volunteer“?

As the word evokes, the peer support is a social initiative provided by a “peer”, a person who is similar in fundamental ways to the recipient of the support. A peer is in a position to offer support by virtue of relevant experience and can relate to others who are now in a similar situation. Solidarity is what moves these people to help organisations, such as Première Urgence Internationale and solidarity is a very important concept in this community.

In addition, “the peer population understand what we do not and we can’t perceive”, says Irma.“The aim of our mission is to increase trust and kill stigma in public health services, starting from the base and not from a high level, for example with big campaigns about prevention.”

In Myanmar, the discrimination pervades neighborhoods, workplaces, but even hospitals. Also children with HIV (9500 children affected) are regarded as dangerous or as the product of immorality. In addition, a law criminalising “unnatural” sex and a penal code, which dates from the British colonial era, is reinforcing the stigma that leaves Men having Sex with Men in Myanmar hidden, hindering efforts to contain HIV/Aids. As a result, they are often terrified of going to a doctor for a sexually transmitted infection. In this context, prevention and education are a key factor to fight against stereotypes and against a disease that still kills 9700 people in a year (2014 statistic).

“The meaningful participation of civil society, in particular at the community level, has been a vital tool in enabling an effective AIDS response. We started with 20 peer workers and now they are 40”, affirms Irma. Using this approach, in some months there has been a five-fold increase in the number of people that come to our meetings. In conclusion, this is a very important experience regarding the access to the population and the HIV/AIDS awareness interventions, through a community-based approach.