By continuing to use this site, you agree to the use of cookies. Cookies are used to suggest information based on your browsing patterns and to provide us with information about site usage. For more information and to manage these settings, click here
Home > News > “I realised that my children and I deserve to be happy”

“I realised that my children and I deserve to be happy”

Dawlat is 44 years old. When her home in Syria was hit by a bomb in 2013, she lost her husband. She fled Syria with her four children and sought refuge in Lebanon. She settled in the border village of Aarida, in Akkar. In 2017, she started attending psychosocial support sessions carried out by Premiere Urgence Internationale. 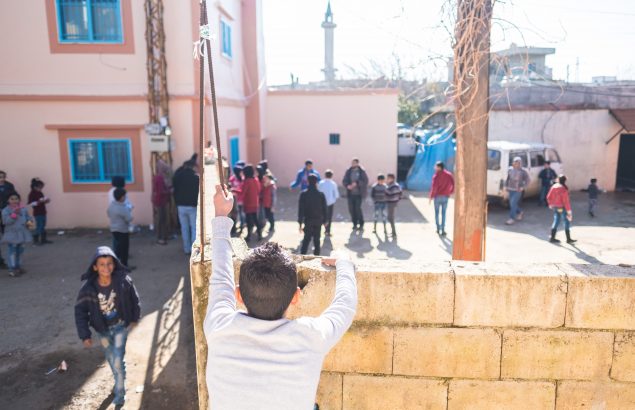 “When I arrived in Lebanon, everything seemed strange. It was a new society, I was alone and I could not stop thinking about the death of my husband. I was afraid I would not be able to feed my four children.”

When she arrived in Lebanon, Dawlat started working as a farm worker to secure the expenses of herself and her children. Thus, she registered her children in the Aarida public school as she wanted them to keep studying. It was difficult for Dawlat’s children at the time to adapt to their new environment. “They were crying all the time”, Dawlat said.

When Premiere Urgence Internationale started the psychosocial session in the school of Aarida in 2017, Dawlat was immediately interested. It was indeed important for her to know more about the school and her children. It was also a way for her to meet new people around her and think about different things. “Otherwise, I would always worry and think about work”. She then started to attend the psychosocial sessions.

Rafah, Première Urgence Internationale social worker leads the psychosocial sessions, she comes twice a month. Once, during a session, she burst into tears. So, Rafah came to Dawlat household the following day, to speak with her. Dawlat explained her situation to the social worker, what she went through and what caused her trauma, her suffering. Dawlat was indeed carrying alone the whole family, caring for her four children, paying the bills, working, facing discriminations in the village too…She needed help.

She became aware of her own issues

The psychosocial sessions increased Dawlat’s resilience. Thus, she became aware of her own issues and how to solve them. She was encouraged to participate more, to open herself. She enjoyed drawing because she could explain where her inspiration came from. Now, she likes to share her ideas. She even facilitated one of the sessions in December 2017.

“I grew confident thanks to the parents’ sessions. I feel very comfortable there and it made me realise that my children and I deserve to be happy. I let my stress and anger out, I feel relieved. We all carry a lot of problems but we tend to forget about the strengths we have within us. I realised that I can be strong again.”

Dawlat’s situation improved. Indeed, she now invites people to attend the women sessions and became one of Première Urgence Internationale’s focal point in the village of Aarida.