By continuing to use this site, you agree to the use of cookies. Cookies are used to suggest information based on your browsing patterns and to provide us with information about site usage. For more information and to manage these settings, click here
Home > News > Myanmar : a project all feminine, toward a safer motherhood

Myanmar : a project all feminine, toward a safer motherhood

Nowadays, Burma is one on the poorest country in the world. Women, especially pregnant women, are particularly affected by the lack of access to essential services.

In addition, according to the report of 2014, the maternal mortality rate in Myanmar has raised this year to 282 on 100 000 births, in relation to an average of 230 in developing countries.

To improve the quality of the maternal and child health, Première Urgence Internationale has created in September of 2013 a project intended to strengthen professional skills of midwives and midwives assistants, while tightening the link between them.

This project of mobile health, called « mHealth », is based on an innovate approach, that uses information and communication technologies (ITC) to reinforce the quality of mothers and child cares. 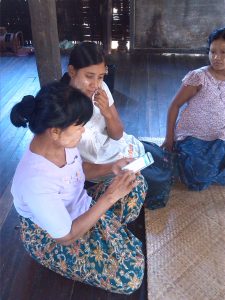 Première Urgence Internationale, pioneer in this approach, has developed a phone application, especially created for midwives and their assistants and adapted to the Burmese context. For every medical examination, a series of questions on the state of the patients guides them in realizing a consultation by following national procedures and international standards. Also they are reminded to control certain important elements. Starting from the data collected, the application gives assistants instructions on what gestures they have to do or about the necessity to visit a midwife.

This system helps the medical staff to make a good diagnosis and a high quality consultation, but it has also an educational role. In fact, the application gives the possibility to auxiliaries who work in isolated regions to create a virtual medical record for every patient and to share it easily with midwives that will take care of them.

At the beginning of this project, Première Urgence Internationale provided mobile phones to about thirty members of the medical staff. The majority of these women who don’t have access to electricity have also received mini solar panels to recharge their phones, wherever they are. Finally, educational sessions have been organized to teach them how to use the application.

In January 2017, Première Urgence Internationale has renewed the project, in collaboration with the Sanofi Espoir Fondation, with the objective to extend the positive impact of its first intervention and the utilization of the mhealth, started in the south of the Yangon region, Karen state and Tanintharyi, to a national level.

Locally, the NGO will continue to develop its services and to improve the capacity of assistants by reinforcing the network and the relationship between midwives and health centers, hospitals and already existent programs.

In the Kayin and Dala regions, 84 midwives assistants and 45 midwives are supported by this project, which aims to accompany all pregnant women in this zone to go toward a safer motherhood.