By continuing to use this site, you agree to the use of cookies. Cookies are used to suggest information based on your browsing patterns and to provide us with information about site usage. For more information and to manage these settings, click here
Home > News > The challenge of being a farmer in Gaza, facing electric power failures and military incursions

The challenge of being a farmer in Gaza, facing electric power failures and military incursions

Every day, farmers in Gaza are facing dramatic consequences of the current situation of the area. Première Urgence Internationale is taking action to help them. Explanations. 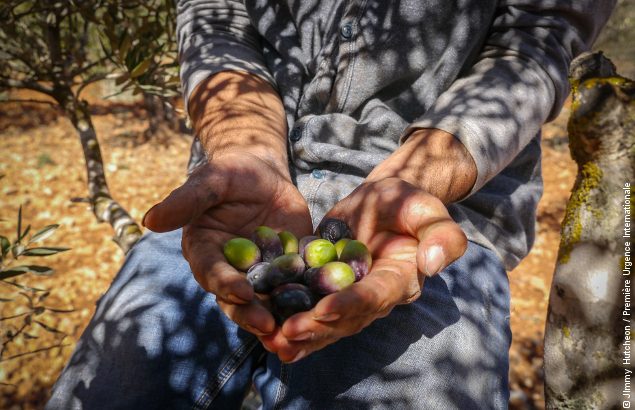 Accessing the lands: an everyday challenge

To be a farmer at the Gaza strip border is to face dangers and challenges that have nothing to do with the core of their work. Besides the air, sea, land total blockade that is isolating the territory and strongly limiting the movement of people and goods for 11 years, Israel established a buffer zone along the border.

In practice, this means that 17% of Gaza’s land is submitted to restricted access. To be walking between 100 and 1500 meters from the border may be dramatically dangerous. As 35% of the agricultural lands are in this area, many farmers can no longer work on their own land and are forced to rent some other land elsewhere. This is the case of R., 56 years old. He owns land along the border but had to rent some other parcel further away.

Farmers, victims of excessive use of force by the Israeli army

R. was wounded in the hand by an Israeli army shoot in June 2017. Demonstrators entered his parsley field during a manifestation against the blockade. After they left, he received a call. As he took his phone out of his pocket, the army shot him. Since then, he can no longer work in his field. He received financial support from Première Urgence Internationale to pay for his medical care. In 2017, 297 similar accidents occurred in this border area, causing 12 deaths. Farmers, shepherds and hunters were victims in 35% of these accidents.

Farmers have to face the difficulties due to the presence of Israeli forces in this area. Tanks and bulldozers level the land regularly, destroying all vegetation. Planes spray herbicides that severely damage crops, causing significant losses. Losses from the last herbicide spraying, which took place for four days in early January (1), were estimated at about 1 million euros by the Ministry of Agriculture in Gaza. And 212 farmers were affected.

60% of water needs are not satisfied

An energy crisis has hit the Gaza Strip for almost a year. It arises from political disputes between Palestinian authorities in the West Bank and those in Gaza. Its impact is negative for agriculture. Indeed, electricity used for irrigation systems, is available only 4 to 6 hours a day and often during the night. In addition to the fragile security context, farmers are often forced to work in the dark.

Debts that do not stop growing

H. is 55 years old. He is a farmer in Khuza’a, a village in the Khan Younis region in southern Gaza Strip. He has been farming for 35 years, but his working conditions have changed drastically since the beginning of the blockade imposed on Gaza in 2007. As of this year, his income has been reduced by 80%, from around 850 euros per month to 170. His plant nursery was damaged during the war in 2009, 2012 and 2014, causing a loss equivalent to 93,000 euros that he has trouble paying back. “I now have a debt of about 65,000 euros“, he says. “I am afraid to die and leave this debt to my children“.

A response to the needs

Première Urgence Internationale teams assist farmers working in the restricted area to maintain their agricultural activities and livelihoods. H., for example, is supported by Première Urgence Internationale and receives agricultural tools and seeds to reduce its investments and not aggravate its debts. Other activities are also developed, such as the provision of solar panels to meet electricity needs and allow farmers to irrigate their fields. Première Urgence Internationale also supports female farmers to help them start or restart an income-generating activity. Thus, the NGO develops a whole range of actions to meet the daily needs of the most vulnerable households and those directly affected by the prolonged conflict between Israel and the Occupied Palestinian Territory.

However, all attempts of solutions are temporary, as long as the main cause of the stalemate is not addressed. The difficulties faced by farmers derive directly from the practices used by the occupying power to maintain the blockade. These practices, as well as the blockade itself, constitute violations of international law. As a result, only a cessation of these violations can provide a real solution to the daily challenges of farmers in Gaza.