The different humanitarian crises in Colombia, triggered by mixed migratory flows, climate change and decades of internal armed conflict, have affected more than 12 million people in 2022 – especially children under 5, pregnant women and the elderly.

Despite the signing of a peace agreement between the irregular armed groups and the Colombian government in 2016, a significant increase in violence has been noted, including against the civilian population. As a result, almost 8 million people are under confinement or internally displaced.

Moreover, 5 million Venezuelans have fled to neighbouring countries following the socioeconomic crisis and are in dire need of humanitarian assistance. 2 million of them intend to settle in Colombia, where they, as well as Colombians, face extreme climate events such as flooding, landslides and earthquakes.

As a consequence, the latest studies show that 6 million people don’t have access to healthcare 7.3 million suffer from food insecurity and 4.6 million are victims of systemic violations of their human rights in Colombia.

Since 2019, Première Urgence Internationale mobilises its teams to respond to the urgent needs of Venezuelan, both in exile and settled in Colombia, as well as Colombians returnees and those living in conflict-affected territories.

The NGO runs its operations in Arauca and Norte de Santander, near the Venezuelan border, as well as in Casanare and Santander, closer to Bogota. Hence, Première Urgence Internationale has focused on delivering first-level health and mental health services to both Venezuelans and Colombians who cannot access the national health system due to their migratory status or the total absence of State-owned service providers.

In this regard, Première Urgence Internationale has stepped in to narrow this gap, being the only health-related organization available in those regions

In Colombia, Première Urgence Internationale is working in consortia with other humanitarian organizations to provide a comprehensive response to the needs of affected populations.

The programmes carried out aim to guarantee migrant populations’ access to quality medical and mental healthcare, as well as psychosocial support, regardless their nationality, focusing on those without access to the national health system. To meet these needs, permanent and mobile teams operate in the caminantes routes of Pamplona-Bucaramanga (Norte de Santander and Santander) and Paz de Ariporo-Yopal (Casanare). The support also includes awareness raising on protection risks migrants may encounter, as well as on available services alongside the route until they reach Bogota. Première Urgence Internationale works in partnership with Solidarités International, who provide hot meals and temporary shelter.

In the regions of Arauca and Norte de Santander, controlled by guerrilla groups, Première Urgence Internationale offers primary healthcare, including distribution of drugs to treat infections and non-communicable diseases such as diabetes and hypertension; reproductive and sexual health services, including family planning and termination of pregnancy; as well as mental health services and psychosocial support in five health attention points for individuals who cannot access the national health system, namely irregularly settled Venezuelans or Colombians who never got a chance to get health insurance from the Government.

Pictures of the humanitarian mission in Colombia 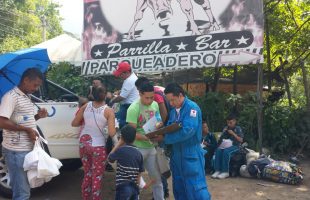 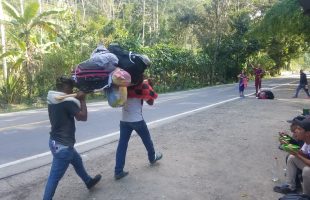 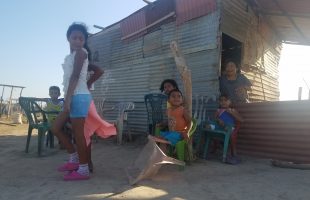 In December 2021, journalist Jean-Paul Mari follows Route 55, which many Venezuelans take on foot to reach Colombia. Since 2014, 6 million Venezuelans have left their country. The Première Urgence Internationale teams are mobilizing to meet their needs.

Colombia: Emergency Response of our Teams in Arauca Department

At the end of March, clashes in Venezuela between the Venezuelan army and armed groups caused thousands of people to be displaced from the Venezuelan border to the Colombian border. Our teams were on the ground to bring support to the population.

Colombia: “As purchasing manager, I deliver meals to migrants on the road”

Tania Rodríguez, a Colombian repatriate, is head of the service point in Curití, in Santander, the main road between Bucaramanga and Bogotá and practically the only support point for “caminantes” arriving from Venezuela.