By continuing to use this site, you agree to the use of cookies. Cookies are used to suggest information based on your browsing patterns and to provide us with information about site usage. For more information and to manage these settings, click here
Home > News > Testimonies from the field: the benefits of Mental Health support in an Iraqi settlement

Testimonies from the field: the benefits of Mental Health support in an Iraqi settlement

Première Urgence Internationale’s ECHO-funded Health and Mental Health and Psychosocial Support (MHPSS) teams have been providing care services since the beginning of April 2020. In one of these settlements, Kilo 7, three people who benefited from these services tell us about their stories.

Kilo 7 is the name given to an informal settlement of Internally Displaced People (IDPs) in central Iraq (Ramadi district) located on the Kilo 7 of the road. It used to be a place with residential buildings, but it suffered heavy destruction because of the conflict.

This largely populated informal site hosts a great number of displaced families who had no access to any Mental Health support until the project “Increasing Access to Integrated Health, Mental Health and Psychosocial Support, and Protection Services for Conflict-Affected Population unable to return to their Area of origin in Iraq” started.

Throughout this intervention, Première Urgence Internationale established strong links and mutual trust with Kilo 7 community. The Mental Health and Psychosocial Support team visits the settlement regularly, to be able to follow-up closely on the cases.

Aicha is 49 years old and originally from Ramadi-Kilo 5, in Al-Anbar Governorate. She is divorced and lives in one house with her family, which consists of 13 persons. The family was displaced during the 2014-2017 war and is now living in Kilo 7 informal site.

Aicha has been living in Kilo 7 since she was displaced. She was approached by the Mental Health and Psychosocial Support team and started to receive support. Later in October 2020, she joined the Community Volunteers programme.

Before joining the sessions, Aicha says that she was an obscure person who does not know how to express her feeling and psychological state.

“I did not have the courage to talk of my condition and psychological problems. I never thought of sharing my issues to a psychologist or even talking about it in front of others because of the fear of being judged and stigmatized.”

After attending the sessions, she changed her perception of what Mental Health and mental disorders are. She became more aware of the way she interacts with her children, controls her nervousness. She said that she understands the importance of effective discussion and dialogue: “Thanks to the care and support I received, I feel now much better.”

She shared what she learned from these sessions with neighbors and relatives to raise awareness and improve society’s view of psychological support cases: “I raised awareness of my community, educated the participants and helped people of my community to express ourselves more, share our problems and to not feel ashamed of talking of our psychological difficulties.”

Aicha said she noticed some positive impact: “People who were violent or were suffering to control their anger and emotions before can now deal calmly with community members and children.”

Aicha also mentioned the benefits of the allowance provided by Première Urgence Internationale for her involvement in community outreach and awareness activities within her community. This financial support helped her to buy equipment and items for her small shop and pay off part of the debts she has.

Noor is 38 years old and originally from Ramadi-Al-Sheraa, in Al-Anbar Governorate. She is a widow with four children. Her husband died during the 2014-2017 war. Noor endured many psychological traumas due to the conflict, the loss of her husband and the heavy burden of being responsible of four children alone. She is now living in Kilo 7 informal site and joined the Community Volunteer programme since October 2020.

“The psychological support I received helped me in several ways. I am able to control my anger and deal with frustrations as well as taking better decisions. I am aware that expressing my feelings and talking is helpful to decrease tension and improve my psychological condition. I am not keeping everything for myself anymore. I am not shy and I even talk of my psychological difficulties without hesitation. I also pay more attention to people in the community who also suffered a lot around me.”

Regarding her own treatment, she describes it as such: “It has a positive influence in dealing with my children in a good way without affecting them because of my psychological state.”

Noor feels more confident and understands, as mother of four children, she has an important role in her family and in society.

“I urge other people to participate and benefit from Mental Health and Psychosocial Support (MHPSS), there are many cases similar to mine and it would help them greatly.”

Noor also mentioned that she received an allowance as a Community Volunteer, which helped her to provide for the basic needs of her children. This support was very helpful as there is no one to support her.

“Thanks to the MHPSS team of Première Urgence Internationale for helping and supporting me. Now I am feeling better. My children and I are grateful for the support we received.”

Jamila is 25 years old and originally from Ramadi, in Al-Anbar Governorate. She is married and has no natural children. Jamila was strongly impacted by the 2014-2017 war as one of her sister died and she was displaced. Her sister had one child that she had to adopt, as contacts with the rest of the family are inexistent. Jamila suffered multiple traumas and difficult experiences. She suffered of displacement, the loss of a close relative and the necessity to adopt and raise a child that is not hers. She is now living in Kilo 7 informal site and receiving Mental Health and Psychosocial Support. Since October 2020, she joined the Community Volunteer programme.

“Previously, I was dealing with the child that I adopted in a way that is inappropriate for her age, with outbursts of anger and unable to contain or understand her. After attending the psychological support sessions, my dealing with this child changed completely for the better. Now, I am listening and understanding her needs more calmly. I learned how to deal with children according to the age group and the appropriate methods for each group. The child became more responsive and listening to me positively as a result of the change in my dealing with her for the better.”

Jamila said that she has always been looking for this kind of sessions to deal with her psychological difficulties: “It helped me to improve my self-confidence and get useful information on how to reduce tensions with systematic communication with my relatives.”

Jamila also contributes to the project as a Community Volunteer and participates in raising awareness on the Mental Health support in Kilo 7 community. She insisted on the challenges faced by people living in the camp and that communication with relatives and support from external Mental Health and Psychosocial Support staff can really help people to express more their feelings and problems, and improve the Mental Health wellbeing.

This is not always easy with the pressure of society: “Every person in the community is exposed to psychological pressure on a daily basis and often does not find someone to talk, understand and provide counseling. All those frustrations then turn into psychological problems. Talking and discussing is really helpful and can have visible impact at the whole society scale.”

As a Community Volunteer, Jamila emphasized that Première Urgence Internationale team provided an allowance to volunteers during the training as financial support, which helped her acquiring equipment for the basic needs of the house and the child, and paying her debts.

“I want to thank Première Urgence Internationale and the Mental Health and Psychosocial Support team for the help provided to us and regular care. Now, I am more understanding and aware than before”. 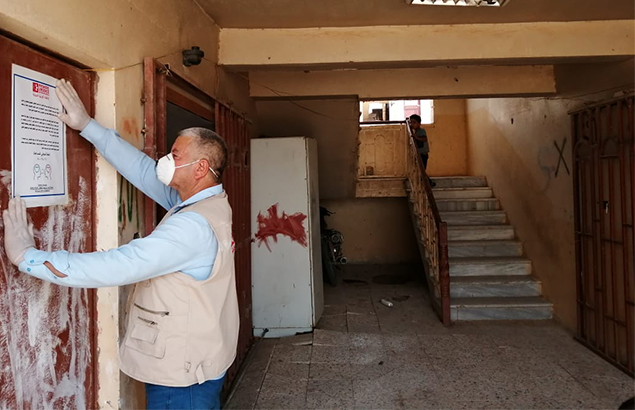 Première Urgence Internationale has been implemented in Iraq since 1983 (first under the name Aide Médicale Internationale). The NGO brings help to vulnerable refugees, displaced persons as well as host communities, in order to improve their living conditions and reinforce their resilience, enabling them to regain dignity and autonomy.

By making a donation to Première Urgence Internationale, you allow the teams to continue their work on site and to raise awareness about Mental Health among communities.

This project is funded by the European Civil Protection and Humanitarian Aid Operations (ECHO).

*To respect the privacy of the people helped, the name of the individuals interviewed were changed

Since December 2019, Première Urgence Internationale managed for nine months the provision of primary free health care services in the reopened camp of Bardarash, Kurdistan region of Iraq. The teams ensured individual mental health follow-up and counselling, as well as training of Iraqi doctors to improve the services provided inside the camp.

Iraq: Alongside families living in camps, to keep them safe from COVID-19

In Iraq and Kurdistan, Première Urgence Internationale is an important camp health actor, managing primary healthcare centres in three camps hosting refugees and internally displaced people. To continue responding to the needs of these vulnerable populations in these times of pandemic, the mission reorganised its functioning, putting in place quarantine areas and conducting awareness raising sessions.