By continuing to use this site, you agree to the use of cookies. Cookies are used to suggest information based on your browsing patterns and to provide us with information about site usage. For more information and to manage these settings, click here
Home > News > “I just wanted somebody to hold my hand and help my children”

Violence and death are not the only injuries that people living in conflict suffer. Often, trauma is more deeply rooted in each of them. The Première Urgence Internationale’s teams are working in Iraq to provide psychological and mental health support for these wounded populations. 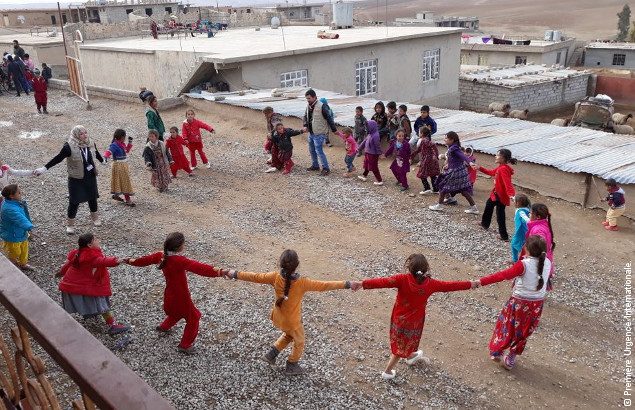 Run away from violence, but never truly escape from it

Samia is a Syrian mother of three children. Her husband died in a bombing and her eldest son witnessed it. Since then, he has been traumatized by the death of his father. “After the attack, he remained hospitalized for 3 days, without news of his father, his family or their health. Then I found him“, explains his mother. Since then, he has become mute, the trauma he suffered being so important.

Samia explains: “Later, I remarried and we all moved to Kurdistan. We became refugees. My children and I suffered from a severe psychological disorder to the point that I was looking for a fight with my husband every day. And it only got worse”. Her husband then heard about the Première Urgence Internationale mental health and psychological support teams and told her about them. “I immediately agreed to meet them because I was tired and needed to talk. At that moment, I just wanted someone to hold my hand and help my children“.

The psychologist then explained that her children needed psychological support. “As the sessions progressed, I had the impression that a huge weight was gradually leaving me. I was better able to control myself and manage the situation. Since then, my relationship with my husband and children has improved greatly“, she shares.

In Iraq, the shelter of a family was hit by air strikes. The father was killed. The mother managed to escape with her three young children and the four of them took refuge in the Kilo 18 camp. The mother suffered from a number of psychological disorders such as sleep and eating disorders, anxiety and depression. She dreaded social interactions with others. The family was very isolated. Her children, too, suffered from the violence they had witnessed: they were emotionally unstable and wet their bed every night.

The woman was obsessed over the idea of air strikes bombing the camp. At first, when she met the Première Urgence Internationale’s teams, her speech was confused, discontinuous. She was in dire need of being listen to, which the teams did through several sessions. Gradually, she began to recover.

The teams then focused on her children: Maqtada, 10, Hadel, 8, and Reem, 6. After making sure there were no medical problems, the teams set up group sessions for the children. The goal was to open dialogue with them.

Through game therapies, stories or movies, little by little it eased the dialogue. In five weeks, the children did not wet their beds at night anymore. Improving the mental health status of her children has also greatly helped the mother get better.

Première Urgence Internationale takes action in Iraq with Syrian refugees and Iraqi internally displaced persons (IDPs) who lack access to psychological services. From the beginning, the teams noted that a large number of IDPs and conflict-affected people suffered from mental health problems and psychological problems such as depression, anxiety or suicidal thoughts. Although facing many cultural and other constraints, they have set up mental health and psychological support in the country.

Click here to learn more about our action in mental health in Iraq.