By continuing to use this site, you agree to the use of cookies. Cookies are used to suggest information based on your browsing patterns and to provide us with information about site usage. For more information and to manage these settings, click here
Home > News > A way back to school

A way back to school

After war, violence, escape, returning to school can be difficult for Syrian refugee children and their education is a real challenge. Première Urgence Internationale is working in Iraq -where 230,000 Syrians live- to help these children find their way back to school. 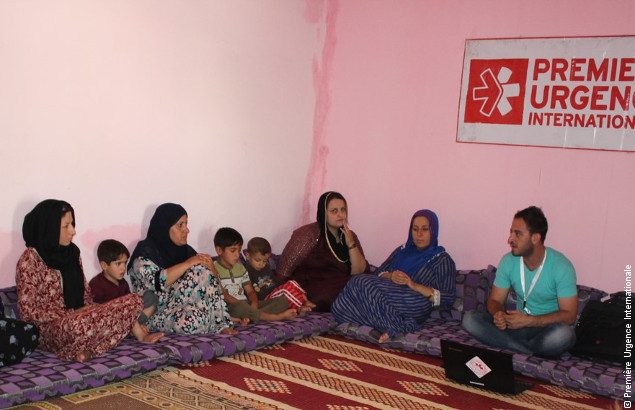 From war to school

Syrian refugee children have endured war, escape and unimaginable violence. They often present psychological trauma and may be disconnected with reality, which makes it difficult for them to readjust and find their way back to school. Thus, because of the war, Syrian refugee children often lack regular school mentoring. Many have dropped out of school to work and help support their family’s need.

Jiyan is 12 years old. She and her family fled Syria in 2004 for Iraq. The family financial situation is complicated. As a result, Jiyan failed in two subjects, Kurdish and English, and eventually stopped going to school. Since then, she has lost interest in studying and does not want to go back.

Ra’ad is 13 years old. He never really liked school. In Syria, he failed his first two years of primary school. Therefore, when he arrived in Kurdistan in 2013 and was forced to start primary school all over again, it took a long time to convince him of the importance of continuing its education.

Saya and Sara are 12 and 11 years old. They fled Syria with their families in 2012. As they moved several times from one place to another, the two sisters ended up stopping going to school. They had to face many financial difficulties but also challenges related to the language barrier or commuting between school and home. Now, because of all this, they both feel daunted by the study of Kurdish and the idea of going back to school.

Educational activities to help them

Première Urgence Internationale has implemented awareness sessions on topics such as the importance of education or the different types of education that exist in Iraq. The goal is to show parents the interest their children would have in going back to school.

The teams also set up Kurdish classes to help Syrian refugee children to be less apprehensive of this language. Indeed, speaking Kurdish is an important point for their integration into the community.

In addition to summer schools, education awareness activities and focus groups are given to provide the most comprehensive support possible to refugee children and restore their taste for school and learning.

Find their way back to school

Jiyan’s mother participated in an awareness session of Première Urgence Internationale. “My daughter has stopped school. We encourage her, but I would like you to talk to her and convince her to go back to school“, she told us at the end of the session. After a meeting with the girl, she agreed to take part in summer courses in English and Kurdish. After that, she eventually decided to go back to school.

Raad’s mother also took part in awareness sessions and asked Première Urgence Internationale teams to talk with her son. After a new session at home, Raad, re-motivated, then participated in Kurdish classes in the summer to prepare for the new school year and his return to school.

The case of Saya and Sara was identified during a summer session of Kurdish classes. After seeing the girls, Première Urgence Internationale’s educational teams convinced the family to send them back to school. The family also received financial support for the commuting and school supplies of the two girls. “Refugees outside camps need your efforts to have a community without illiterate children,” their father shared.

Click here to see all of the actions of Première Urgence Internationale in Iraq.