By continuing to use this site, you agree to the use of cookies. Cookies are used to suggest information based on your browsing patterns and to provide us with information about site usage. For more information and to manage these settings, click here
Home > News > Drinking water for Haiti 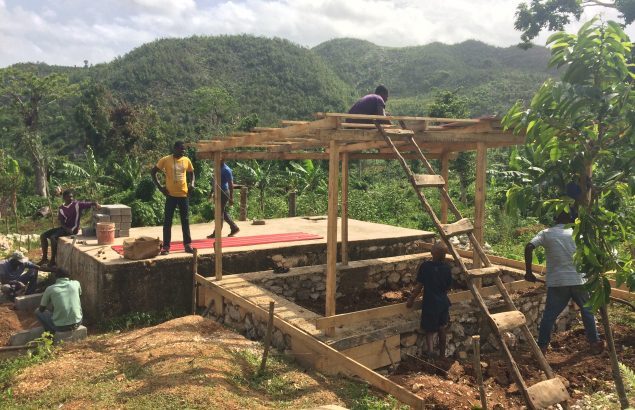 A child of around ten years old plunges a bucket into the pit of the impluvium, a rainwater capture and storage system. He fills it and takes it to his home around one hundred metres away. For the boy, the renovation of the impluvium a few weeks ago by teams from Première Urgence Internationale – part of a project to improve access to drinking water in Haiti – is a real relief. Like the other residents of Pestel, a town in the Grand’Anse department, this child comes here every day to draw the water that he and his family need.

In October 2016, Hurricane Matthew destroyed impluviums in a number of communities, forcing their residents to walk over three hours every day for water. With a container on their heads, the villagers were forced to climb the mountainous slopes of the Mornes and to scramble up dirt roads, inaccessible even to donkeys, to find a source of drinking water.

Several days after Hurricane Matthew hit, teams from Première Urgence Internationale began work in Haiti, providing assistance to the population and improving Haitians’ access to drinking water. “When we arrived after the hurricane had hit, we saw that everything had been destroyed – homes, public infrastructure, everything,” describes Justine Peguet, manager of the Haiti water, hygiene and sanitation project for Première Urgence Internationale.

Some Haitians who live near the coast are still drinking salt water due to a lack of drinking water. Even more concerning is the risk of cholera epidemics. Lack of access to sanitation facilities and drinking water in the country makes the disease easy to spread. 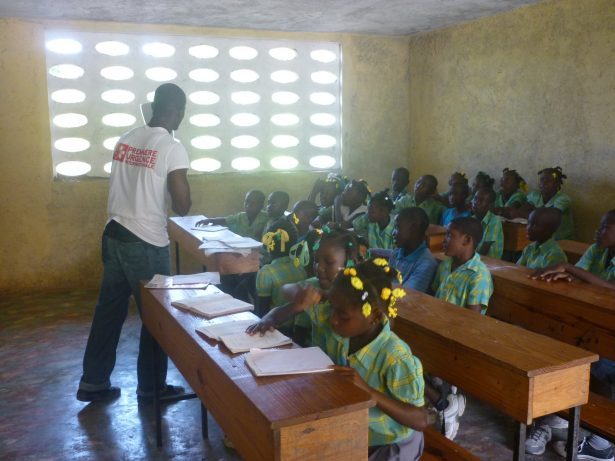 Première Urgence Internationale is focusing its water-related activities in Grand’Anse, the department that was worst affected by the hurricane.  Teams have renovated impluviums whose roofs were ripped off. A chlorine storage building has been rebuilt and sanitation kits have been distributed in Grand’Anse schools near the town of Jérémie.

Following the hurricane, these activities were designed to limit the risk of epidemic, as schools were being used as collective shelters for people whose homes had been destroyed. Six months later, the aim is to raise awareness of hygiene among pupils and their teachers and to clean and disinfect the school sanitation facilities.

50 PEOPLE PER DAY RECEIVED AT THE HEALTH CENTRE

In addition to the project to improve access to drinking water in Haiti, a health centre that was badly affected by the hurricane has been rebuilt by Première Urgence Internationale in the municipality of Jérémie. “We rebuilt the roofs, repainted everything, and renovated the sanitation facilities and the water supply system.” The centre, which receives 50 patients per day, is now operational. In Haiti, a return to normal is long overdue. “People have lived in collective shelters for a long time. They’re gradually returning home,” explains Justine. “In some villages where reconstruction is taking time, it’s quite impressive to see how nature is gaining the upper hand.”

*The activities are financed with support from the OFDA, Sanofi and UNICEF