By continuing to use this site, you agree to the use of cookies. Cookies are used to suggest information based on your browsing patterns and to provide us with information about site usage. For more information and to manage these settings, click here
Home > News > How Makiya survived against severe malnutrition in South Sudan

How Makiya survived against severe malnutrition in South Sudan

About 250,000 children suffer from severe malnutrition in South Sudan*. Among them, Makyia, a little one-year old girl helped by Première Urgence Internationale. 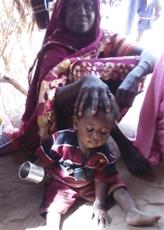 THE SCREENING OF SEVERE MALNUTRITION IN SOUTH SUDAN

Three times a week, Abraham, a community volunteer* in charge of the follow up of severe malnutrition in South Sudan for Première Urgence Internationale, visits Kangabar’s households, a remote village 3.5 hours of walk from Malek Miir. He arrives in the temporary homes settlement made of grass mats and poles, called “shargania”. This settlement is just beside the Kiir river, which symbolizes the border between Sudan and South Sudan.
A little girl is crying in one of these housings. She is one year old and her name is Makiya.

Abraham gets closer to the infant. Her arms and her legs are skeletal, her skin seems to be too large for her. Her face is bony, she has big, sad and sunken eyes, she is very pale. “Makiya?” The little girl does not react when the community volunteer calls her. “She has already been ill for two weeks”, explains her mother. “Her state of health keeps getting worst day after day.” Makiya suffers from vomiting and severe diarrhea. Abraham takes a graduated strap in order to measure the waist of the little girl’s arm, an indicator to know if she suffers from malnutrition. A healthy child would have a 135 mm or less circumference, Makiya’s arm is only 130 mm large.

IMMINENT DEPARTURE TO THE HEALTHCENTER

There is no time to waist, the little girl’s state of health is very worrisome. Abrahams convinces her mother to let her go in the Première Urgence Internationale’s nutrition center in Malek Miir. The mother of the little girl begins to restore her confidence. “If we were to travel to health facilities in North Sudan, the nearest one would take me 3 days of walk, through forests and open field, where security is not guaranteed. And we don’t have any official documents, our journey would have been very complicated.”

COMPLICATIONS BECAUSE OF THE MALNUTRITION

At her arrival at the center, Makiya coughs a lot and has fever. A doctor immediately takes care of her: she only weights 7.3 kilos. The diagnostic is swiftly found: Makiya suffers from severe malnutrition and from medical complications. She needs an urgent treatment.  An hour and a half later, the little girl is transferred to Majak Kaar’s stabilization center, which is better equipped. The infant’s health state has become even worse on the dusty runway. Her skin is very pale and the blood tests confirm that a transfusion is necessary. Unfortunately, the center is not equipped for that kind of treatment. Maikya is taken to Aweil Town, two hours away on the road from Majak Kaar, where she receives the transfusion and her treatment. She will remain at hospital for many days.

Fifteen days after the beginning of her treatment, Makiya and her mother are taking back to home. In the car, a sad woman is seating next to Makiya. Her child did not survive to malnutrition despite of the healthcare.

A few weeks later, Makiya eats an adequate quantity of food and she gets her appetite back. She will continue to eat extra portions until her full recovery.

As for her father, he decided to commit into the community and to promote Première Urgence Internationale’s nutrition program. “I am so glad that we could save our daughter”, he explains, smiling.

* A community volunteer is a person in charge of the coordination between populations and to screen malnutrition cases.