On October 4th, 2016, the hurricane Matthew ripped into Haiti. The departments of the South, of the Nippes and of the Grand’Anse were seriously impacted by winds blowing at 215km/h. With a strength of four on a scale of five, the hurricane caused the death of 546 people. In 2017, 2.7 million people will need humanitarian assistance, among which 806 000 require an immediate emergency assistance.

Damage to property is immense, floods were devastating and many inhabitants flee the disaster areas. In the department of the Grand’Anse, almost all houses have been destroyed by the hurricane as well as 90% of the harvest and the health infrastructures have been strongly damaged. The access top drinking water and sanitation are major issues of this crisis to stem cholera.

A team of Première Urgence Internationale was deployed in Haiti a few days after the hurricane Matthew in order to evaluate the primary needs and to prepare an emergency response in coordination with other NGOs on the field, the United Nations and local authorities. After many coordination meetings, the team decided to focus on the department of the Grand’Anse where the needs are the most important because of the absence of humanitarian actors in the area.

Première Urgence Internationale has a strong knowledge of the Haitian territory. Indeed, the NGO left the country at the end of 2013 after 29 years helping populations. Première Urgence Internationale had then withdrawn from the country putting back to the Haitian government an autonomous structure of health in capacity to supply care of materno-infantile quality health to particularly vulnerable public.

The challenges for the Haitian authorities are enormous and concern many levels given the major impact of the disaster. During the passing of the hurricane, almost all of the health structures were partially or totally destroyed, as those of the municipalities of Beaumont and Duchity. Première Urgence Internationale rehabilitates these structures, endows them in medical equipment and in medicine for the medical treatment of pathologies in coordination with other humanitarian actors. The teams also distribute hygiene kits and organize activities of promotion of hygiene and prevention of cholera.

Première Urgence Internationale rehabilitates structures for drinking water in the most isolated areas. Finally, the needs for housing remain consequent. The activities of rehabilitation and of kits shelters distribution will allow people to build themselves a temporary accommodation to support the populations having lost their shelters. 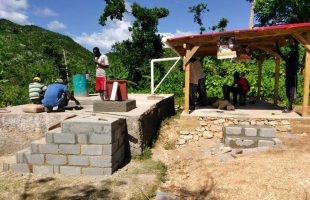 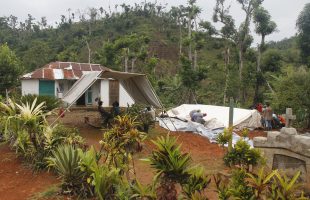