By continuing to use this site, you agree to the use of cookies. Cookies are used to suggest information based on your browsing patterns and to provide us with information about site usage. For more information and to manage these settings, click here
Home > HR news > “The need to help others is in our genes”

“The need to help others is in our genes” 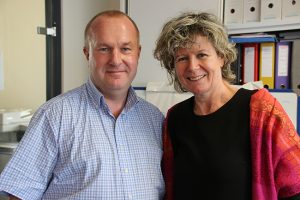 After 35 years working in the private sector, Agnes and Patrick Bouchez decided to turn their hands to humanitarian work. This change of direction has been more about a need to change their lives than a simple career move. The couple, who are joining Premiere Urgence International on a mission to Cameroon, talk to us about their change of career path.

After 35 years in the private sector, what made you both decide to move together into humanitarian work?

Patrick: To look back on the story of how we got here, Agnes and I met at the University of Lyon. We were both on law courses. After we graduated, I started working in a bank, then joined companies in the Transport and Logistics sector. During those years I mostly ran various SMBs with 100 to 1,000 employees all over France.

Agnès: I qualified in labour law then joined human resources departments in a few different businesses in France. I was the Director of Human Resources at the headquarters of big companies for many years. Patrick and I have both always had a strong affinity for humanitarian work, so at the same time, we have always volunteered with charities.

Patrick: I think that the need to help others is in our genes. We waited for the right time, for our children to be independent, then we decided to make our move. We’ve thought for several years about how best to transfer our skills to the humanitarian field. In December 2015, we left our jobs in the private sector and started courses in humanitarian work at the Institut Bioforce. I went into project coordination, which lined up well with my previous experience. Agnes, of course, was naturally drawn to Human Resources.

Agnès: In the meantime, we spent three months as volunteers with a local NGO in southern India to reassure ourselves we were doing the right thing. That was the deciding factor, and we made the decision to joint the humanitarian sector permanently.

What drew you to Premiere Urgence Internationale?

Agnès: We were at a humanitarian trade show in Annamasse and we met some members of your NGO who really got us excited about joining Premiere Urgence Internationale. We share a lot of the organisation’s values. The closeness that there seems to be between the headquarters and the teams and the diversity of the areas in which you intervene as well as the idea of the integrated approach really spoke to us.

Patrick: Essentially, Premiere Urgence Internationale gave us the impression of being on a human scale, an organisation where “procedure” never takes precedence over people. That’s important to us.

And how did you react when you were offered the mission to Cameroon?

Patrick: We were really happy to have been chosen. We only had one condition, and that was that we would be sent to the same country because our plan is a common goal, it has always been a project we wanted to undertake as a partnership. So, we were delighted to have the chance to have this experience together even if we aren’t going to be based in the same town.

Agnès: For us, it’s a chance to discover other cultures, other people, and to take on new challenges. We’re both over 50, and we really appreciate that Premiere Urgence Internationale has placed its confidence in us.