By continuing to use this site, you agree to the use of cookies. Cookies are used to suggest information based on your browsing patterns and to provide us with information about site usage. For more information and to manage these settings, click here
Home > News > Première Urgence Internationale provides shelter assistance to vulnerable families in Lebanon

In response to the Syrian crisis, Première Urgence Internationale intervenes in Akkar, one of the most under-developed governorate of Lebanon and main host area for Syrian families. The NGO supports host and refugees populations by providing shelter assistance, to avoid risks of eviction and improve their housing conditions. Here are the stories of some families supported. 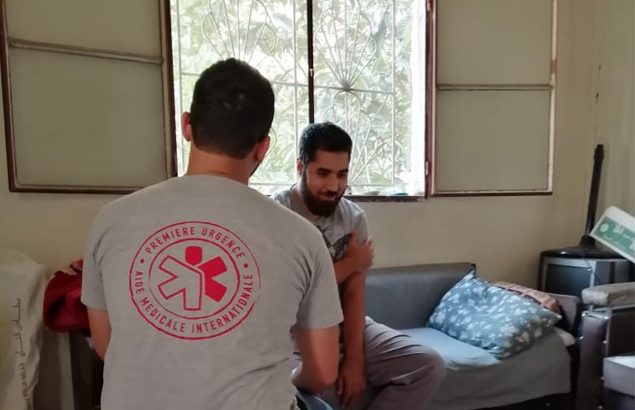 Mohamad: “I am disabled but I hate feeling incapable”

By the beginning of 2013, Mohamad, his wife and their 3 children crossed the borders and officially moved to Lebanon, running away from Syria. They first settled in the Bekaa valley, where Mohamad got a stable job as a foreman. But one day, Mohamad had an unfortunate work incident: he fell in a worksite from a building under construction. His wounds had to be urgently treated, yet due to his limited income and the high hospitalization fees in Lebanon, he had no choice but to be treated in a home clinic. Unfortunately, due to a medical error, Mohamad lost his ability to walk properly, and could no longer move without having to lean on one of his children.

“Before the accident, I hadn’t enough money to save. My whole income went on food, clothing, medication and school transportation for my children. Until the day came that my salary would not be enough for me to treat myself.” Struggles followed one after the other. He lost his job, as he could no longer work. Then he lost his wife, who left to remarry. With his children, Mohamad decided to move to Akkar, settling in an unfinished building and reaching humanitarian organizations for assistance. Première Urgence Internationale’s teams visited their shelter and considered Mohamad’s case in urgent need for support.

As Mohamad was disabled and limited of movement, he benefited from additional works specific for his condition. Additional tiles to the bathroom walls, improvement of the toilet seat, building of a hollow block seat in the shower area, plastered wall in the living area, installation of a handrail on the external stairs… Multiple improvements so Mohamad could be able to rely on himself. “It might sound foolish but I was happy as a child when the handrail was installed! I am a disabled man but I hate feeling incapable. It broke my heart every time I had to lean on one of my children to go downstairs.”

Baker: “Being blind, it’s hard living in a house on two floors”

Première Urgence Internationale’s teams also met Baker (photo), a 33-year-old Lebanese living in a shelter with his whole family: his wife, his mother, and his younger brother and sister. Both Baker and his brother were born blind, and never had the ability to see – which made hard for them living in a house on two floors. Première Urgence Internationale’s teams visited the family and considered the house a priority for rehabilitation.

The shelter’s condition was found below standards, as it had several missing items, inadequate sanitation facilities, as well as an unsafe stairway considering the situation of two of the family members.  “Up until now, our stairs were very narrow, and had no handrail”, Baker’s mother confirms. Première Urgence Internationale then provided the family direct cash assistance, in order to give them the possibility to perform works on the house and improve its conditions. With the help of some neighbours, Baker found suppliers and workers and they completed the needed works. The family even managed to save up some money, to do additional works on the front porch, for Baker and his brother’ safety.

Fasl: “Our biggest dream: A roof over our heads”

Fasl arrived to Lebanon with her family in early 2014, crossing the border with her husband and their 6 children. As of their arrival to Lebanon, the family moved between several shelters that were all self-made, as they could not afford shelters with better conditions. They finally settled in a ground floor unfinished shelter in an agricultural land with a zinc roof and no weather proofing items, the shelter was considered extremely below standards and unfit for living.

In the family, the father was the only man in the house that could find a job. With such a low income, the couple could barely pay for their family’s basic needs and their children’s medical needs. Première Urgence Internationale’s teams visited the family in their shelter and conducted the vulnerability assessment. Fasl’s family was selected to benefit from rehabilitation. The works were designed in order to cover all of the shelter’s needs: external weather proofing items, internal doors for privacy, upgrading of the sanitation facilities, and supporting of the ceiling by installing a zinc light roof in order to limit the water leakage.

“Honestly, the work done is all of what we hoped for. We live at a time where our biggest dreams are to have a roof over our heads, a window and a door to keep our children warm and safe. It kills a mother, being helpless, while seeing her children cold and scared in winter nights”, Fasl says. “I know it for a fact, if we hadn’t received the rehabilitation assistance, we would have never been able to do the work by ourselves. In 100 years, my husband wouldn’t make this amount of money”.

All these activities have been made possible thanks to the financial support of the United States’ Bureau of Population, Refugees and Migration (BPRM). In total, since the beginning of the project, Première Urgence Internationale’s shelter assistance program benefited to 1937 people in 495 shelter units.
Discover more about our mission in Lebanon