By continuing to use this site, you agree to the use of cookies. Cookies are used to suggest information based on your browsing patterns and to provide us with information about site usage. For more information and to manage these settings, click here
Home > News > Nigeria: Première Urgence Internationale stands against gender-based violence

To fight against gender inequalities and violence against women and girls, Première Urgence Internationale is conducting several protection activities in Bolori II, Maiduguri, Nigeria. Since 2018, the NGO’s teams have trained a hundred volunteers that help convey messages within local communities. To ensuring that, in future, gender-based violence and inequality is no longer a taboo in this country. 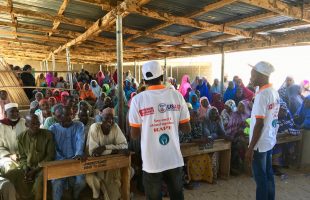 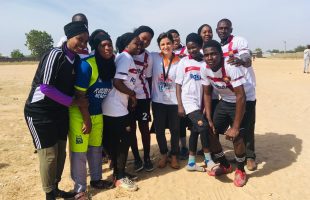 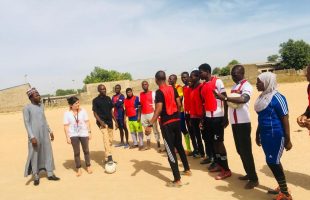 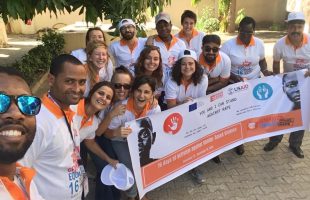 « You and I stand against rape. » Awareness session about sexual violence delivered by Première Urgence Internationale’s teams – November 2019.

Maiduguri, North-East of Nigeria, is a city of refuge for millions of internally displaced people, who have massively fled the ongoing conflict and violence caused by Boko Haram. Première Urgence Internationale is present in this city since 2016, and provides healthcare services, nutritional monitoring and food assistance to the populations.

Since 2018, the organisation implements an awareness project about protection. It deals, among other things, with the issue of gender-based violence. The NGO developed awareness campaigns with the support of community liaison officers, as well as focus groups, for gathering information on common practices and delivering relevant messages. A strategic monitoring is also used to identify and reference the most vulnerable individual cases.

Breaking the taboos through modern media

In Maiduguri, awareness sessions are regularly animated by 120 volunteers, also known as “community leaders”. They are trained once a month by Première Urgence Internationale’s Protection team. The sessions they deliver are targeting groups of 40 to 50 people, focusing on specific themes (as the cholera outbreak, during summer 2019), or on more general themes (fighting gender stereotypes, preventing negative systems of education, refusing early marriage…). Community leaders are trained to adopt a friendly and interactive approach. For instance: role-play, theatre performances, fun staging. Since August 2019, more than 17,000 people were involved in these awareness sessions.

At the same time, Première Urgence Internationale’s teams lead discussion groups in smaller committees. Participants (6 to 10 people) are divided into homogeneous categories (example: only young women aged 16 to 20) in order to create a climate of trust and confidentiality. The objective is to convey messages, but also to collect information about the ongoing common practices within the community. It gives opportunities to discuss sensitive taboo themes, such as menstruations, domestic violence, consequences of rape for the victims…

This prevention program also finds its way to the airwaves of a local radio station, Peace FM, popularly listened to in Maiduguri, by local community as well as by internally displaced people. This radio station is commonly used by NGOs to communicate awareness messages. Since November 2019, Première Urgence Internationale broadcast, on a weekly basis, several jingles and radio commercials with key messages, both in Hausa and in Kanuri (local languages). Examples: “Women are the pillars that support a progressive society” ; “Gender equality is everyone’s priority” ; “Join the rest of the world as we celebrate the international day for women rights on the 8th of march 2020”.

A new awareness strategy, which is bearing fruit in the field. “A few weeks ago, I spoke with a woman in a focus group”, Camille Attias, Protection Project Manager says. “She told me: ‘Now, I don’t let my adolescent daughter beg and busk in the streets anymore, because I heard on the radio that it could be dangerous and that she could be sexually assaulted’.”

Set up a long-term monitoring

Première Urgence Internationale’s teams also implemented powerful tools of follow-up and monitoring. The teams are collecting data every day on current trends observed in Bolori II setllements. Key data and figures are compiled every month, alongside 10,000 people. Since January 2020, 497 pregnant women participated in at least 2 prenatal information sessions, to prepare for childbirth and rely on up-to-date medical information.

Monitoring is also carried out with newcomers at Bolori II. How many are they, where do they settle…? Because many of them directly install in other families’ homes, without transiting through informal settlements. “Sometimes, it is complicated to have a really clear picture of humanitarian needs”, Camille Attias explains. “Therefore, we try to meet people, to assess their urgent needs, and we advocate towards our partners and other NGOs to get support and alert about the situation.” Cases considered ‘extremely vulnerable’ are referred by Protection teams to Health, Nutrition or Food security teams, as well as to other services provided by Première Urgence Internationale’s partners. This may be the case for example for young women who turn to prostitution to feed their family: the so called survival sex.

From this monitoring, Première Urgence Internationale also develops longer-term activities to preserve and promote mental wellbeing, and to help people share their traumatic experiences. “In a small house, a ‘safe place’ for discussion, we sit down on chairs and we start chatting, in groups of 5 to 6 people. The same groups are meeting week-to-week. We ask for instance: ‘What do you know about gender inequality? What did you personally experienced about this?’ And after, we propose a painting recreational activity. Everyone presents his or her drawing and tell, through it, the trauma they endured.”

“There is an increasing trend to developing a long-term follow-up, working together collaboratively among Protection and Mental health teams”, Camille Attias analyses. Première Urgence Internationale’s projects often rely on leisure activities, music, sports, in which people can find healthy and creative outlets, to express themselves while being accompanied by professionals. In December 2019, for example, a football match was organised with young community members. Teams were mixed, boys and girls. And after the collective sport, a focus group was proposed under a tree, beside the football field, to address gender inequalities. « We had captivating exchanges of ideas. It worked well!”

Throughout the upcoming month of March, Première Urgence Internationale will also develop specific activities, echoing the International Women’s Right Day. A collective walk will be proposed in Maiduguri, jointly with other NGOs and partners.

All these activities have been funded thanks to the Office of U.S. Foreign Disaster Assistance.  In total, since the beginning of this project, more than 24,000 people participated to awareness workshops on this important subject of protection, in Maiduguri.