The Democratic Republic of the Congo is one of the most complex and long-lasting crises in the world.

According to OCHA, the country is home to the highest rate of acutely food insecure people in the world (27 million) and nearly 4.2 million people are acutely malnourished, including 2.4 million children under the age of 5.

Armed conflict and insecurity predominate in the East, particularly in the provinces of Ituri and North Kivu, resulting in chronic population displacement, protection issues, including gender-based violence, malnutrition, deteriorating food security, and low coverage of basic services. According to OCHA, in 2021, the DRC will have 5.5 million internally displaced persons (IDPs), of which 1.5 million will be displaced by armed or inter-communal conflicts.

Première Urgence Internationale has been working in the Democratic Republic of the Congo since 2001. After being recognized for a long time as a pilot NGO in the coordination of displaced persons’ camps in the East, in recent years the NGO has regularly positioned itself in the response to epidemics (measles, Ebola, COVID-19) and has developed intervention strategies according to new pockets of emergency (Kasaï 2017, North Ubangui 2018, North Kivu 2019), as well as in areas forgotten by humanitarian radars (Mai-Ndombe 2021).

The heart of Première Urgence Internationale‘s action today is based on the issues of access to primary health care, sexual and reproductive health, the fight against malnutrition and access to livelihoods, for which it is a recognized player throughout the country.

In 2022, Première Urgence Internationale is carrying out projects in Kinshasa, North Kivu and Mai-Ndombe for the benefit of the most vulnerable populations, particularly for children under five and pregnant and breastfeeding women.

In Kinshasa, the NGO is committed to the fight against sexually transmitted infections (STIs), including HIV, through a STI/HIV prevention and awareness-raising project and the provision of health care, particularly for young people between 15 and 24 years of age, pregnant women and sex workers.

In Mai-Ndombe, in consortium with Action Against Hunger (ACF), which leads the project, ALIMA and MAGNA, Première Urgence Internationale contributes to the prevention of morbidity and mortality related to acute malnutrition for children under five and pregnant and lactating women through the PUNCH project.

North Kivu, the NGO provides support to the most vulnerable populations through actions to combat food insecurity, malnutrition, particularly among pregnant and breastfeeding women and children under five, and support for access to free comprehensive and quality primary health care services.

The Democratic Republic of the Congo in pictures 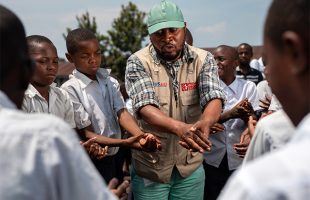 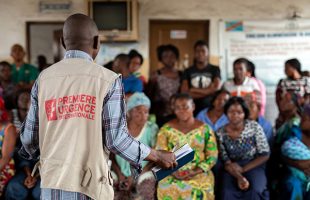 The province of North Kivu in the Democratic Republic of Congo counts today 2.5 million people in need of humanitarian aid, according to the Humanitarian Needs Assessment 2022 (UNOCHA). Première Urgence Internationale is working on the ground to help the population cope with food insecurity.

Born in the Democratic Republic of Congo in the village of Ibanda in Mai-Ndombe, Ekangala M. is the youngest of a family of three children. He was four years old and weighed 7 kg when his mother, Mrs. M., brought him to the health center in Ntanda. Ekangala suffers from severe malnutrition: in a normal nutritional situation, a four-year-old child weighs an average of 16 kg. Ekangala is immediately taken care of by the members of Première Urgence Internationale, and then sent to the hospital where he will be treated