By continuing to use this site, you agree to the use of cookies. Cookies are used to suggest information based on your browsing patterns and to provide us with information about site usage. For more information and to manage these settings, click here
Home > News > Fighting malnutrition in Ibanda, Democratic Republic of Congo

Born in the Democratic Republic of Congo in the village of Ibanda in Mai-Ndombe, Ekangala M. is the youngest of a family of three children. He was four years old and weighed 7 kg when his mother, Mrs. M., brought him to the health center in Ntanda. Ekangala suffers from severe malnutrition: in a normal nutritional situation, a four-year-old child weighs an average of 16 kg. Ekangala is immediately taken care of by the members of Première Urgence Internationale, and then sent to the hospital where he will be treated 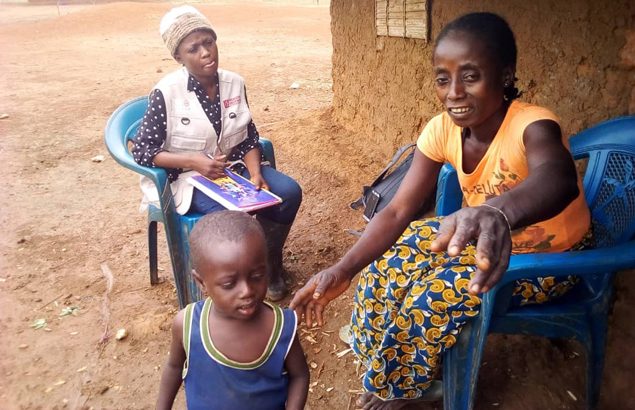 Ekangala and his mother are interviewed in front of their home.The photo shows Ekangala in good health with her mother. The photo was taken 6 months after the consultation. © Première Urgence Internationale.

The causes of malnutrition in the Democratic Republic of Congo (DRC):

Difficulties to feed her family

“After each season, we sell part of our harvest and allocate the other part to our personal consumption. Our problem is that we sell locally at a very low price. This allows us to buy salt, oil and sometimes clothes, but we cannot afford to buy fish or meat. One of the reasons for this is the political unrest that has been a daily occurrence in the DRC for the past 20 years. The Mai-Ndombe area has been the scene of conflicts that have caused significant population displacements and have made it difficult to access necessary foodstuffs such as fish.

Before arriving at the health center, Mrs. M., alarmed by her son’s weight loss, did not know what to do. Her son no longer wanted to eat the manioc and amaranth leaves that are the family’s staple diet: “He was losing weight visibly, and I could see peeling on his skin.” She then took him to the tradipratician1 of her village who prescribed remedies for her child, which did not improve his condition. She then heared about another traditional practitioner who is specialized in malnutrition diseases (called mapsi) in Ntandembelo. She went there with her son in the purpose to meet him. However, once she arrived in the city, she learned that “visitors” were providing preventive care for children suffering from malnutrition. She chose to consult them instead of the second traditional practitioner. Première Urgence Internationale agents could therefore observe Ekangala and organize his hospitalization for six days.

“Day by day, I saw my child regain his health until he was declared cured. This made me very happy!” says Mrs. M. She also explains how the lack of local structures gives rise to bad reflexes and false certainties among parents: “Here, in the community of Ntandembelo, we tend to believe that malnutrition is incurable. Whereas it is because of a lack of knowledge, we believe that the traditional practitioner brings healing, whereas sometimes, time passes, and then it is death”. 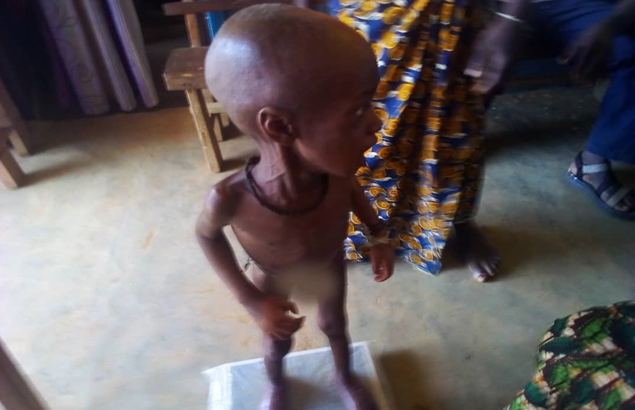 Ekangala being weighed after her arrival at the health center on April 23, 2021. © Première Urgence Internationale.

The Première Urgence Internationale program in the DRC.

The intervention of Première Urgence Internationale through the Consortium “Programme d’Urgence Nutritionnelle par Coalition Humanitaire” (PUNCH) led by Action contre la Faim is taking place in the health zones of Ntandembelo and Bandjow Moke in the Mai Ndombe province. This intervention aims to contribute to the prevention of morbidity and mortality related to acute malnutrition in the Democratic Republic of the Congo.

More specifically, Première Urgence Internationale in the Democratic Republic of the Congo is strengthening key health services in the area by detecting and treating cases of acute malnutrition, while continuing to ensure access to quality primary health care. In addition to this first pilar of intervention, our NGO’s actions aim to prevent the occurrence of general nutritional crises by implementing community-based strategies. The objective: to improve infant and young child feeding practices within the community, to set up or improve water and sanitation facilities and to promote good hygiene practices.

1 A tradipraticien or traditional healer is a person who is recognized by the community in which he or she lives as competent to diagnose diseases and disabilities prevalent in that community and to provide health care by using plant, animal or mineral substances.

This project is supported by the Foreign, Commonwealth and Development Office (FCDO).