By continuing to use this site, you agree to the use of cookies. Cookies are used to suggest information based on your browsing patterns and to provide us with information about site usage. For more information and to manage these settings, click here
Home > News > DR Congo: valuable food aid in remote areas

The province of North Kivu in the Democratic Republic of Congo counts today 2.5 million people in need of humanitarian aid, according to the Humanitarian Needs Assessment 2022 (UNOCHA). Première Urgence Internationale is working on the ground to help the population cope with food insecurity.

The province of North Kivu is the scene of daily armed conflicts between non-state armed groups and government armed forces, heavily affecting the civilian population. It represents a challenge for NGOs with operations limited by insecurity, the isolation of several areas and multiple administrative obstacles.

However, the Kibua health zone, where Première Urgence Internationale teams are based, seems to be an exception: since the beginning of 2021, it has been an island of stability and a relatively stable host zone where security risks can be mitigated. With the support of the French Embassy and its Programmed Food Aid programme, our teams were able to provide the first direct humanitarian aid in the locality of Kibua, for vulnerable populations and in particular for displaced people fleeing the danger of clashes.

This territory remains difficult to access, with deteriorated roads limiting access to public services and humanitarian aid, as well as higher prices than in other parts of the region, increasing the vulnerability of the population.

Emile and Ndoole Kubuya are two young Congolese people living together in the commune of Kakambi. Emile had planned to build his own house in order to start a family with Ndoole Kubuya. However, during the construction, he was seriously injured and transferred to Goma for treatment. He remains convalescent to this day, while his wife is expecting her first child. It was therefore the community members who decided to finish the construction work. As for Ndoole Kubuya, she has benefited from Première Urgence Internationale’s food security project in order to feed her future family.

Since April 2021, Première Urgence Internationale has been helping to improve the living conditions of the most vulnerable in the province of North Kivu. This project allows them to improve their agricultural production through training in agricultural techniques, the distribution of food seeds and farming tools, and the organisation of food fairs. In addition, by raising awareness of essential nutrition-related practices (breastfeeding, hygiene, etc.) and identifying the symptoms of malnutrition, or through participatory cooking demonstrations, the populations of the area can fight against the scourge of malnutrition. 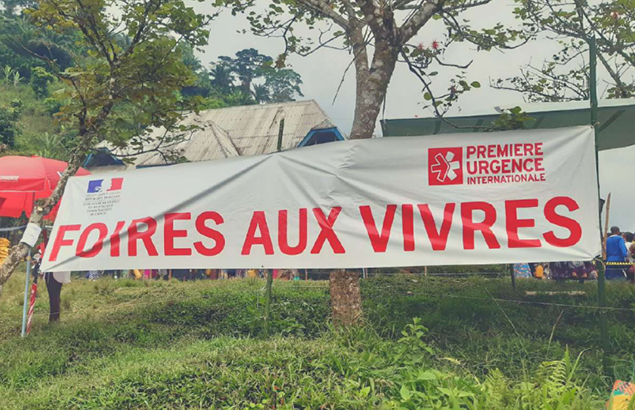 To this day, three fair sites have been set up within five kilometres of the homes of people benefiting from our project, representing emergency food assistance for more than 2,000 households in the health areas of Kibua, Luvungi, Limangi and Karambi.

It is in this context that Ndoole Kubuya received seeds and was guided by Première Urgence Internationale teams to grow and harvest peanuts and maize in her field located about four kilometres from her home. She and her husband were able to consume part of the harvest and sell the rest, ensuring food and financial security.

On 8 February, Ndoole Kubuya went to the food fair near her village to buy rice, beans, salt and oil. But when she arrived at the fair site, she felt strong pains in her belly: these were her first contractions, a sign that she was in labour. Some ladies from the village accompanied her to the health centre in Karambi.

Ndoole Kubuya quickly gave birth to her first child after arriving at the health centre, supported by Première Urgence Internationale as part of a health project. She was able to give birth free of charge and benefited from a post-delivery kit that allowed the young parents to welcome their child in the best conditions.

Emile and Ndoole Kubuya decided to name their child Première Urgence. They explained this choice by the fact that the child was born on the day they went to the food fair organised by Première Urgence Internationale and in a hospital supported by the NGO.

The story of Emile and Ndoole demonstrates the vulnerability in which the population of this province lives, reinforcing Première Urgence Internationale’s desire to deploy increasingly effective humanitarian aid in the field, particularly through projects related to food and health.