By continuing to use this site, you agree to the use of cookies. Cookies are used to suggest information based on your browsing patterns and to provide us with information about site usage. For more information and to manage these settings, click here
Home > News > Lebanon: Rehabilitation of insalubrious housing for vulnerable families

In 2020, multiple factors have impacted the NGO’s activities in Lebanon: COVID-19, socio-economic and political crisis, explosions of Beirut’s port … In spite of everything, the teams stayed the course and achieved their objectives.

From the 1st of November 2019 to the 30th of November 2020, Première Urgence Internationale worked on the project “Rehabilitation of insalubrious housing for vulnerable families affected by the Syrian crisis”.

This program, funded by the Abbé Pierre Foundation, aimed to rehabilitate 100 unsanitary housing units in the Palestinian camps of Miye w Miye and Ein el Hilwe, as well as in the cities of Saida and Bqosta, mostly located in southern Lebanon.

Romain Prado, Deputy Head of Mission for the programs explains: “For this activity of rehabilitation of insalubrious housing, the NGO selected households based on vulnerability criterias, possible specific needs and the evaluation of their housing condition, without distinction of nationality.”

A total of 101 families composed of 492 people have seen their housing conditions improved thanks to this project. The populations targeted by this program are Palestinian, Syrian, Lebanese and all in a highly vulnerable situation.

In accordance with minimum standards in terms of housing (SPHERE standards adapted to the context), Première Urgence Internationale focused on the installation of windows, bars, barriers, lighting and entrance doors inside the home in order to improve home security, privacy and access to basic sanitary facilities. 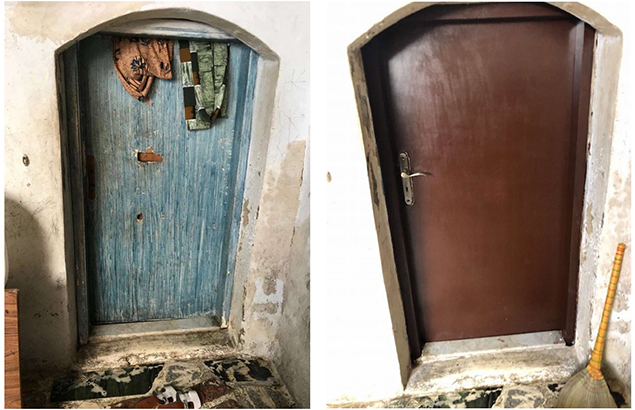 The past year has been particularly unstable in some informal settlements in Lebanon: the promiscuity and precarious living conditions in these camps lead to tensions and violence between the different groups living there.

In addition to security, the NGO focused on access to water, hygiene and sanitation through, for example, the replacement of sanitary facilities and insulation.

Throughout the rehabilitations, Première Urgence Internationale‘s teams followed up with providers and the people receiving help on a monthly basis through visits or by phone when sanitary conditions did not allow it.

Adjusting the way we operate

The economic crisis caused a very strong devaluation of the Lebanese pound and thus an exponential increase in the price of consumer goods and imported materials during the first half of 2020. Consequently, the NGO could not proceed as usual.

Usually, the people involved are the ones who purchase the materials needed for the rehabilitation of their homes. This method allows the inhabitants to participate fully in the action set up and guarantees a better appropriation of the project by the families.

The financial crisis affecting Lebanon forced Première Urgence Internationale to turn to service providers. This new approach has allowed us to improve the quality of the rehabilitations provided through building professionals selected through a call for tenders as well as a better respect of deadlines.

Due to health constraints, rehabilitation activities were put on hold from the 21st of March to the 24th of May during the country’s lockdown, which only allowed emergency activities for NGOs. 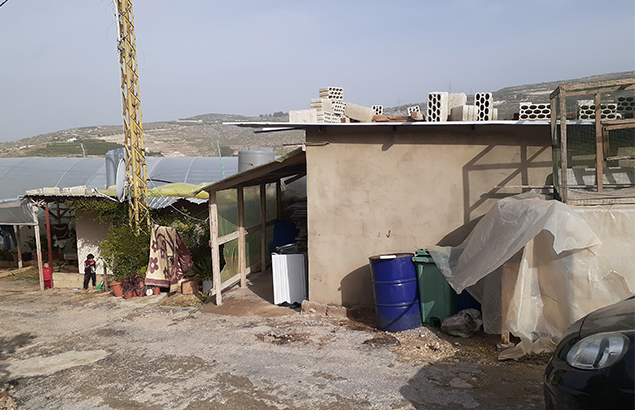 Housing of a vulnerable household, attached to an agricultural site

In the summer of 2020 activities were able to resume but the explosion that occurred on the 4th of August in the capital disrupted once again the initial agenda of the NGO. Indeed, the teams on the spot were urgently mobilized to meet the needs of the populations affected by the tragedy.

“The rehabilitation teams assessed the damage on 12 primary health centers in Beirut and handed out emergency rehabilitation kits,” says the Deputy Head of Mission for the programs.

The rehabilitation project was nevertheless able to be completed by adapting and innovating in the face of multiple situations while meeting its initial objectives.

“The rehabilitation of their housing has enabled these people to reduce their exposure to certain protection risks such as gender-based violence or the risk of eviction”, explains Romain Prado. He adds: “This project fits perfectly into Première Urgence Internationale‘s strategy, which is to provide a multisectoral response adapted to the different populations in vulnerable situations.” 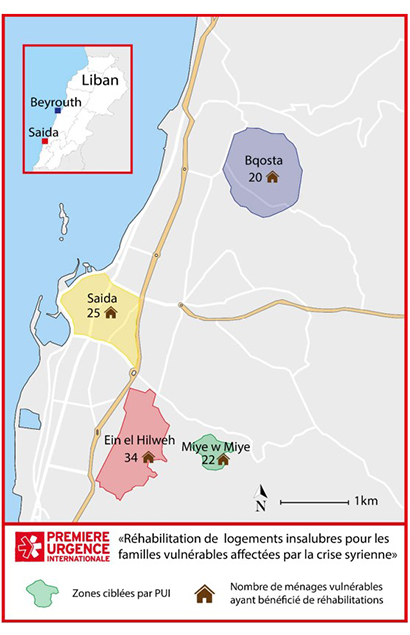 Despite the success of this project, additional assistance is needed to improve the living conditions of vulnerable populations in Lebanon. Especially those of the Palestinian populations who benefit from limited humanitarian aid.

“In Palestinian camps in particular, where housing is particularly unhealthy, local committees have expressed the need for additional repairs”, says Romain Prado.

Movement restrictions due to the pandemic have profoundly deteriorated the ability of vulnerable households to cope and meet their basic needs.

“The lack of economic opportunities and the absence of opportunities for daily work have forced the most vulnerable households to adopt negative coping mechanisms, including child labor, reduction of the food basket, or reduction of expenditures related to the health of household members.”

In April 2020, the International Labour Organization (ILO) predicted an “aggravation of pre-existing vulnerabilities” as a result of the COVID-19 pandemic for people working in the informal economy “in developing and emerging countries”.

“For many people in the informal economy, to stop working or working remotely at home is not an option. In the absence of income replacement or savings, staying home means losing their jobs and, for many, losing their livelihoods”, underlines the report.

Première Urgence Internationale is present in Lebanon since 2003. The NGO mobilizes its teams to bring support to local populations and to address the refugees’ needs.

Since 2011, the Syrian crisis has displaced millions of people outside and inside the country. As a result, Lebanon’s population has increased by 25%. This influx of population stresses a major pressure on Lebanese facilities, already weakened by a long lasting internal crisis.

To meet the various needs of the population in the country, the NGO is active in several areas  including health, protection, shelter, food security, agriculture and livelihoods.

With your help, Première Urgence Internationale can continue to work for the most vulnerable people in Lebanon. You can support our actions by making a donation here.

These activities were made possible thanks to the support of the Abbé Pierre Foundation.

Lebanon: “It is important to stick to basic healthcare, apart from COVID-19”

The current pandemic must not overshadow other health emergencies and sanitarian crises faced by vulnerable people. In Lebanon, Première Urgence Internationale takes great care of providing constant support to vulnerable populations and facilitating them the access to basic services, despite the stress caused by COVID-19 pandemic.