By continuing to use this site, you agree to the use of cookies. Cookies are used to suggest information based on your browsing patterns and to provide us with information about site usage. For more information and to manage these settings, click here
Home > News > Explosion in Lebanon: Our teams deploy an emergency response 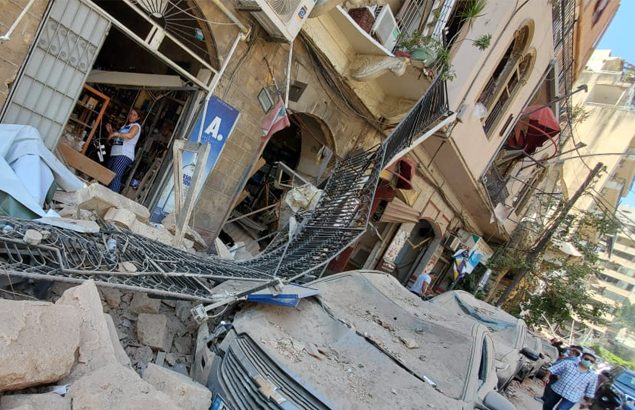 © Première Urgence Internationale – Beirut, 5th August 2020.
Tuesday August 4, 6:10 p.m. A double explosion from the port shakes Beirut and its surroundings. The cause is probably an accident: an industrial building located in the port of the city and containing a cargo of highly flammable products caught fire. According to the authorities and the Lebanese Red Cross, there are so far at least 137 victims, around 5,000 injured, and hundreds of missing (provisional assessment as of August 6, 2020).

Première Urgence Internationale reaffirms its full solidarity and support for the populations of Lebanon, alongside which its teams have been mobilized for more than two decades.

Half of the city of Beirut is damaged. 3 hospitals face substantial damage. A drug warehouse located near the port is severely damaged and requires relocation of stored resources. On civilian infrastructure, the toll is also very heavy: around 300,000 people saw their homes destroyed as a result of the explosion.

The tragedy of this explosion and the extent of the damage caused in the Lebanese capital represent a new disaster for all the populations of the country, already weakened by multiple crises. Since the day of the incident, Première Urgence Internationale’s teams, who do not deplore any deaths due to the explosion, have done everything possible to ensure the continuity of operations in the country – more necessary than ever – and to intervene in support of emergency operations that will be deployed in the upcoming hours and days.

For more than two decades, the activities of Première Urgence Internationale in Lebanon have indeed included a major medical component, with in particular a project aimed at improving access to health services for all populations of the country, Lebanese, Syrians and Palestinians, through technical and financial support to the country’s primary health centers.

To respond to the consequences of this tragic event, and while Lebanon and the whole world are still facing the COVID-19 pandemic, Première Urgence Internationale is mobilizing all its human, logistical and financial resources to provide a rapid humanitarian response adapted to the situation.