By continuing to use this site, you agree to the use of cookies. Cookies are used to suggest information based on your browsing patterns and to provide us with information about site usage. For more information and to manage these settings, click here
Home > News > “It’s a real chaos in the streets of Mosul”

“It’s a real chaos in the streets of Mosul” 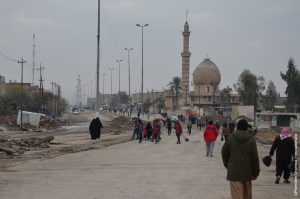 A team from Première Urgence Internationale went to Mosul, in Iraq, in order to assess the populations’ humanitarian needs. In the city of Mosul, violent fightings have been taking place since October 2016.

Liam Kelly, the Head of Mission of Première Urgence Internationale in Iraq, describes a situation which is worst day by day.

“We carried out this sanitary assessment in December 2016 and we found out that it is a real chaos in the streets of Mosul. I saw buildings and public infrastructures completely ruined. The damages caused by shootings and shelings are significant. Several inhabitants do not have access to potable water. Neither can they provide themselves with gas or kerosine. The situation becomes worrying with winter and the low temperature. Moreover, the prices have considerably increased along with the crisis, everything is very costly and the population has no money.

There are also a lot of victims of the fightings. The hospitals, whenever working, are overloaded  and a lot of people are in a critical condition. The seriously injured persons must be quickly sent outside the city to be properly taken in-charge of. But ambulances sometimes take two hours to reach the medical facilities and several patients die on their way to the hospital. 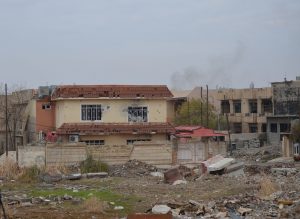 It is not easy for the humanitarian aid to work in Mosul as the risks related to the security are significant. Although, the needs are very important. People of the neighbourhoods I visited, need a basic medical assistance, access to potable water, kerosine, electricity and winter clothes.

Première Urgence Internationale’s team wishes to quickly put into action a first-aid plan for the people in need.” 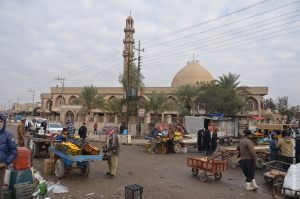