By continuing to use this site, you agree to the use of cookies. Cookies are used to suggest information based on your browsing patterns and to provide us with information about site usage. For more information and to manage these settings, click here
Home > News > A testimony from one of our beneficiaries in Cameroon

A testimony from one of our beneficiaries in Cameroon

In November 2015, Première Urgence Internationale opened a base in Maroua, (capital of the Far North Region of Cameroon, a region that has been affected by the repeated attacks from Boko Haram) to provide aid to thousands of Nigerian refugees and internally displaced people who are all fleeing the attacks and acts of violence.

If at the end of 2016 the safety situation is heading towards a relative lull, the return of refugees and internally displaced people is not yet plausible. The displaced people have lost everything during their escape, finding themselves in precarious economic situations with limited access to basic care and services. Between November 2015 and December 2016 Première Urgence Internationale has brought help to displaced communities in the Mora commune. First, they provided an emergency response characterised by organising food markets and distributing drinkable water to respond to primary needs. They then initiated more durable solutions by restoring boreholes, galvanising the local economy and reviving the means of existence through the support of the development of income-generating activities.

Hadja Madouva Oumar was born in 1996 in Kerawa, a village situated on the border with Nigeria. She arrived in Mora a year and two months ago with her family. This is her story: 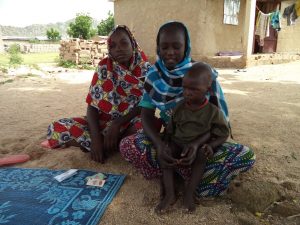 « It all started when our livestock was taken by Boko Haram. Then, they kidnapped the men in the neighbourhood. My father had the courage to climb the wall and escaped after burying our grains and food supplies. A few days after, we followed him and found him in Mora. We found him exhausted after fleeing. The neighbourhood chief welcomed us and arranged shelter for us. We rent this room for 5,000 CFA francs a month. There are nine of us in the family following the death of my father who succumbed to a short illness. We sold everything that we took with us to care for him but this wasn’t enough. We brought him to the house where he spent his final days.

Her father, the head of the family, had been selected as a beneficiary of a project led by Première Urgence Internationale.

« We saw our father’s name, but a few days after the list of beneficiaries was put up our father passed away. Our mother wasn’t allowed to go out at that point in time because the tradition forbids her to for 40 days after the death of her spouse. That’s why it was me who represented my family. Première Urgence Internationale gave us cans, beakers and coupons that we could exchange for water. Then, they gave us eight types of coupons in two batches. These eight coupons meant that we could stock up on sorghum, corn, rice, peanuts, black-eyed peas, oil, sugar and salt. These foods meant that we had something to eat for 60 days, and not the 90 days planned because we shared with our neighbours. We couldn’t eat whilst watching others die of starvation”. 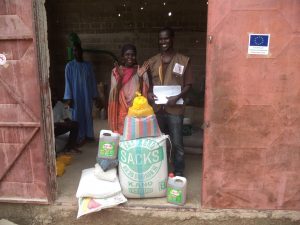 Hadja, like the majority of displaced people, hopes to return home but the instability of the situation means that she isn’t able to consider returning to normal life yet.

« Thanks to the help from Première Urgence Internationale., we are looking at the possibility of going back to Kerawa, but we found out recently that our hiding place was discovered and that the walls of our habitat were destroyed by members of Boko Haram. Now, all we can do about it is cry”.

Hadja’s family is one of 300 households who benefit from training and funding that can help them to start up income-generating activities. Première Urgence Internationale has also distributed food supplies to 1,100 households and water to 650.

This project is funded by the European Union humanitarian unit (DG ECHO) and the general public.