By continuing to use this site, you agree to the use of cookies. Cookies are used to suggest information based on your browsing patterns and to provide us with information about site usage. For more information and to manage these settings, click here
Home > News > Cameroon – “We fled our village after a Boko Haram attack”

Cameroon – “We fled our village after a Boko Haram attack”

In November 2015, Première Urgence Internationale opened a base in Maroua (capital of the Far North Region of Cameroon, a region that has been affected by repeat attacks from Boko Haram) to provide aid to thousands of Nigerian refugees and internally displaced people who are all fleeing the attacks and acts of violence.

If at the end of 2016 the safety situation is heading towards a relative lull, the return of refugees and internally displaced people is not yet plausible. The displaced people have lost everything during their escape, finding themselves in precarious economic situations with limited access to basic care and services. Through a project financed by the European Union humanitarian unit (DG ECHO), from November 2015 to December 2016 Première Urgence Internationale has brought help to displaced communities in the Mora commune. First, they provided an emergency response characterised by organising food markets and distributing drinkable water to respond to primary needs. They then initiated more durable solutions by restoring boreholes, galvanising the local economy and reviving the means of existence through the support of the development of income-generating activities.

Salki Amtcheda is a 20 year old single mother to two children and her little brother. They fled their village of Dougza near Amchide, on the Cameroon-Nigeria boarder and now she benefits from this programme:

“It has been three years since I left my village. We fled our village after a Boko Haram attack one Wednesday, the market day in Amchide. The day after, me, my brother and my eldest son left at 6am, leaving behind the other members of our family. We travelled 24km and got to Mora by 1pm.

We live by begging, from the goodwill of the neighbourhood chef and sometimes by doing housework for people in Mora. We have many struggles: water is a rare commodity in Djakara, the neighbourhood that we live in. We have nothing to eat and nowhere to live”.

Salki and her family received coupons from Première Urgence Internationale to get water delivered to her and to receive food during food distributions. Finally, they received help to launch an economic activity to strengthen their independence and to improve their living conditions for the long-term. 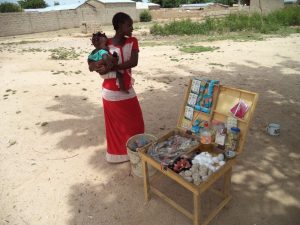 “Première Urgence Internationale has helped us so much. For three years, no other NGO thought of us. Première Urgence Internationale started by distributing kits (containers, beakers, etc.), then coupons to get water for five months. Then they gave us food supplies for three months and then 100,000 CFA francs (equivalent to approximately 150€) deposited in two instalments of 50,000 CFA francs to revive income-generating activities. We’ve also received training on management and finance as well as exercise books, pens, pencils and rubbers to manage our activities.

Now, with support from Première Urgence Internationale, my income-generating activity is a basic necessities business. On my shelf (wooden showcase), there is a bit of everything:  dried fish, vegetable oil, black eyed peas, salt, Maggi cubes, etc. As well as the items on my shelf, I bought two goats, one for 15,000 CFA francs and the other for 18,000 CFA francs. Our business allows us to fulfil, in part, our food needs, healthcare and to buy soap”.