By continuing to use this site, you agree to the use of cookies. Cookies are used to suggest information based on your browsing patterns and to provide us with information about site usage. For more information and to manage these settings, click here
Home > News > In Lebanon, Syrian refugee camps caught in the storm Norma

In Lebanon, Syrian refugee camps caught in the storm Norma

A strong windstorm called Norma reached Lebanon affecting informal Syrian refugee camps in Akkar and in the Bekaa valley.
Première Urgence Internationale, which launched its first emergency response in Lebanon in 1996, intervened to support the populations 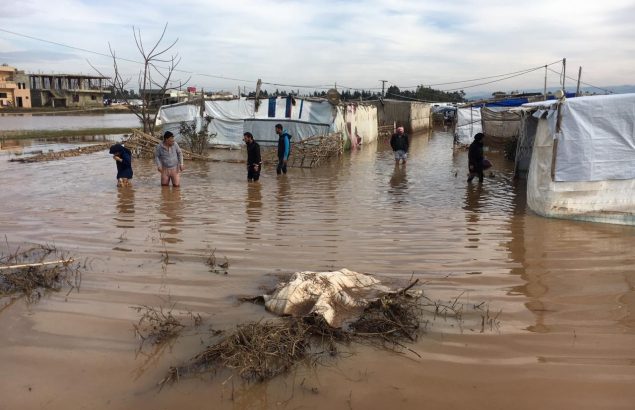 On 6th January, with strong winds, heavy rain and very low temperature for over five days, violently battered the country. Extreme weather left Syrian refugees without shelter and protection. Particularly in the Akkar Govenorate in the North of Lebanon and the Bekaa valley.

Before the storm, Première Urgence Internationale’s teams already operated in Akkar. It’s one of the most underdeveloped part of the country, while also being an area with one of the highest concentration of Syrian refugee’s families.

Première Urgence Internationale’s teams cover the north west of Akkar with 107 active informal settlements, containing 1154 tents and 1179 households. Around 100 tents, pre-identified as the most likely to affected by extreme weather conditions, were already being assessed through UNHCR* assessment form.

Because of the extreme weather conditions, most of Première Urgence Internationale’s areas of intervention were affected. Particularly the settlements located near rivers or the junctions of water channels.

Première Urgence Internationale’s staff was divided into multi-sectorial teams that covered simultaneously four different zones. They were able to assess and respond to the needs of the affected families (shelter, livelihood, and protection).

During the storm Norma, some families moved temporarily to other locations, or to other tents inside the same gathering. Making it more challenging to identify their needs caused by the destruction flood. Premiere Urgence Internationale shared a hotline for all the remaining residents in the informal settlements: the families were asked to contact the teams at any time in case of emergency.

Première Urgence Internationale also distributed 96 tent repair kits, 372 mattresses and 186 blankets. After the end of the storm, all the families returned to their settlements. 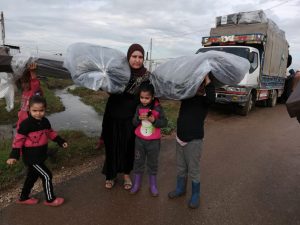 “Thanks to the support of Bureau of population, refugees and migration (BPRM funds), our field teams have been able to launch quick emergency response to the affected families. People with 50 cm of water in their tents and who lost their assets”, highlighted Antoine Sagot-Priez.

A strong cooperation with other NGOs to improve hygiene conditions

In addition to Première Urgence Internationale’s work in making a field monitoring visits to all the settlements and distributing the items for the most affected tents. The NGO cooperated with UNHCR to refer cases for relocation, since they were not able to stay in their tents.

Première Urgence Internationale also referred 23 sites in support to others international NGOs as the Lebanese Red Cross. Mainly for water and sanitation hygiene activities, such as the desludging for the septic tanks (21 settlements), need for water tanks (5 settlements), and need for latrines (1 settlements). Some cases were also identified and referred to UNHCR to receive food items.

Significant needs remain in terms of water drainage and 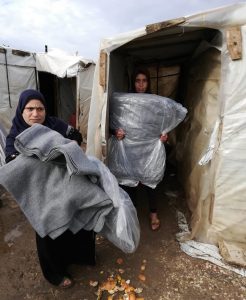 desludging in many informal settlements affected by the storm Norma. There is the risk that these lead to water-borne diseases. Noting that draining water in such extreme and uncertain weather conditions could be problematic. “It also shows that Lebanon is being affected by the climate change. We remain at risk of similar, more and more frequent and violent meteorological events. We have been able to respond to this crisis but we should remain prepared for other storms. However Première Urgence Internationale will remain mobilized to respond.”