By continuing to use this site, you agree to the use of cookies. Cookies are used to suggest information based on your browsing patterns and to provide us with information about site usage. For more information and to manage these settings, click here
Home > News > Improving living conditions in camps in Bangladesh

Première Urgence Internationale has been working in Bangladesh since 2017 to respond to the needs of Rohingya refugees who have fled Myanmar to escape persecution.

One year after the crisis began, in July 2018, Première Urgence Internationale’s teams were aware of the extent of the WaSH (Water, Sanitation and Hygiene) needs that were still unfulfilled. “The camps are huge, and water, hygiene and sanitation needs are still significant,” said Mauricio Tautiva, Water, Sanitation and Hygiene specialist.
The lack of infrastructures, but also the number of temporary infrastructures still being used, was alarming: “On-site coordinators are thinking about working more sustainably over time,” declared Mauricio Tautiva.

With this in mind, Première Urgence Internationale has developed a project in the camps to improve hygiene conditions and access to water and sanitation facilities. Since October 2018, the teams have been setting up activities to help the Rohingya people living in Teknaf Camps, in southern Bangladesh, in the Cox’s Bazar district.

“Although the task of water testing was necessary, the need for drinking water is also urgent”, said Amit Chandra Roy, WaSH Deputy Project Manager for Première Urgence Internationale. “For this, we trained up the water committee on the existing water points, and provided the tools needed for repair and maintenance. We also provided the water tank for an existing borehole with a mini water pipeline”, explained Amit Chandra Roy.

Real work in the field

In order to improve infrastructure quality, the teams are evaluating the latrines, showers and water points installed in the three camps which are directed by Première Urgence Internationale (camps 24, 25 and 27). Based on these assessments, maintenance and reconstruction work is carried out, but also dismantling and replacing when necessary.

At the same time, work is being done to raise awareness among the population about hygiene habits. The teams are doing home visits, group sessions and collective campaigns. This initiative supports the improvement of general hygiene conditions but also the best possible use of infrastructures.

To set up these awareness workshops, Première Urgence Internationale relies on the results of an evaluation carried out by its teams with a sample of the population that represents the area covered. The teams found out that only 28% of the surveyed population could name at least three key occasions when hand washing is essential. Also, more than 15% of the population do not cover their water or food, and 44% mentioned that their children under 5 do not use latrines. 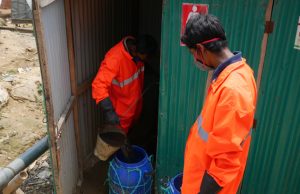 This knowledge allows our teams to adapt the content of awareness sessions in order to respond to the population’s needs. Today, 91% of the population has already attended this type of session. one quarter of people in area intervention are access to drinking water. The solid waste management system is nearly non-existent.
The team’s work in the camps in Bangladesh is always important.

“Now the community is well informed about hygiene behaviour and habits. Basically, the project was designed according to needs in a camp context, and its key demands”, concluded Amit Chandra Roy.

This project is supported by The French Ministry for Europe and Foreign Affairs’ Crisis and Support Centre (CDCS).