By continuing to use this site, you agree to the use of cookies. Cookies are used to suggest information based on your browsing patterns and to provide us with information about site usage. For more information and to manage these settings, click here
Home > News > Ebola: Absolute alertness after diagnosis in Goma (DRC)

Identified in a health center supported by Première Urgence Internationale, the first patient with Ebola virus in Goma, the capital of North Kivu, unfortunately died during his transfer to an Ebola treatment center in Butembo. An additional step is taken in this epidemic. All local authorities and the international community are mobilized to prevent the spread of the virus in this city of more than one million inhabitants. 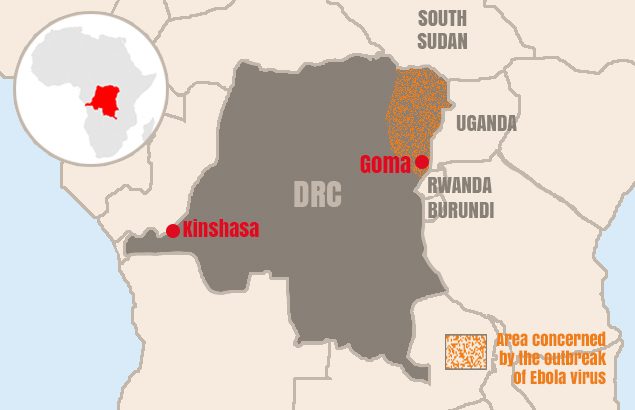 The Ebola outbreak has been declared since 1st of August 2018 in eastern DRC. In less than a year, it already made more than 1,600 victims. To answer back to the spread of an Ebola outbreak, Goma’s base had been reopened. Recently, Première Urgence Internationale has launched a program for the prevention and control of infection in more than 20 heakth centers in Goma, thats to financial support from OFDA. « The outbreakis located in the north ofthe city. The goal of our program is to minimize the rizk of Ebola spreading in the city of more than one million inhabitants, in which the virus would be harder to control », explains Anne-Gaëlle Bril, Desk Manager Africa at Première Urgence Internationale.

« Since several months, our teams have supported health centers, in partnership with the international community. The idea here, is to prepare medical centers and the communities to prevent the spread of the virus in the city of Goma. We train the health workers and provide equipment in the centers so that the teams of the Ministry of Health can detect as soon as possible any suspected cases of Ebola virus. This approach in health facilities is completed by a work at the community level that is essential in this epidemic. said Louise Logre, health consultant at Première Urgence Internationale. The detection of this case was fast. The teams had been formed recently. Unfortunately, the person waited too long to come for treatment and could not be saved.»

For now, the task of identifying all the people who were in contact with the patient begins. Each of them will be monitored and vaccinated to prevent the disease from spreading to Goma. “Coordination between local actors and the international community is essebtial in this humanitarian response. Our prevention program is complementary to other ongoing interventions in the region. The detection of this first case confirms the relevance of our positioning, but above all, it confirms the risk that the Ebola virus disease will continue to spread in the region. Our vigilance is absolute, “concludes Anne-Gaëlle Bril.