By continuing to use this site, you agree to the use of cookies. Cookies are used to suggest information based on your browsing patterns and to provide us with information about site usage. For more information and to manage these settings, click here
Home > News > HURRICANES AND NATURAL DISASTERS, HOW TO PREPARE FOR A HUMANITARIAN RESPONSE

HURRICANES AND NATURAL DISASTERS, HOW TO PREPARE FOR A HUMANITARIAN RESPONSE

Hurricane Irma continues its advance, now with decreasing intensity, towards the southeast of the United States, and storm José, greatly feared, is moving up the Atlantic having caused only minor damage. The most powerful hurricane ever observed in the North Atlantic mobilised Première Urgence Internationale’s teams last week. Olivier Routeau, Head of Emergencies and Operational Development at Première Urgence Internationale, reflects on the situation and explains the emergency response mechanisms that the NGO can activate in the face of a natural disaster. 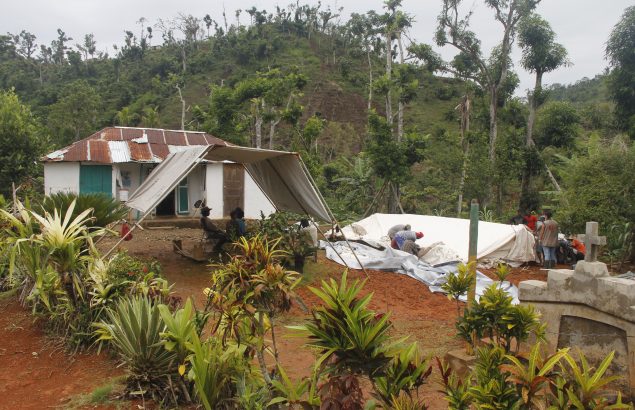 WHAT WAS THE EMERGENCY RESPONSE OF TEAMS AFTER HURRICANE IRMA AND JOSÉ?

Last Wednesday, with the approach of Hurricane Irma, we set up a crisis unit at our French headquarters. Our field teams in Haiti, where we’ve been since Hurricane Matthew in October 2016, were ready to go into action on the ground. We mobilised manpower as well as equipment, preparing hygiene kits, blankets and more than 600kg of medicines which were destined to be sent to the field. We were able to respond quickly. In the end though, the impact was minor in Haiti where infrastructure remained in place and crops escaped unscathed. As a result, the crisis unit was stood down. However, we remain on permanent standby for hurricanes and natural disasters because, unfortunately, hurricane season has only just begun. It will last until December.

WHAT IS THE INITIAL RESPONSE OF PREMIÈRE URGENCE INTERNATIONALE’S TEAMS IN THE WAKE OF HURRICANES, NATURAL DISASTERS?

That very much depends on the context and the situation; however, the priority remains preparation and anticipation. Whilst it’s possible to predict the path of a hurricane over a geographical area a few days in advance, even if its course is still a little uncertain, an earthquake is impossible to predict. Obviously in the case of the latter, preparation time will be more limited.

When we became aware of Irma’s impending arrival in the Caribbean, we decided to focus on Haiti, a country at risk, vulnerable on account of its dense population, the fragility of its infrastructure, and the challenges associated with public authority management in dealing with this type of disaster. It’s crucial to analyse the context, the situation, to take into consideration the humanitarian agencies already in place and to be ready to mobilise all necessary human and material resources required.

To answer the original question though, I’d say that one of our top priorities is to ensure the safety of our teams. Without the necessary personnel there can be no effective emergency response and so their protection takes precedence. Once the hurricane has passed through, the immediate goal is to conduct an assessment, a comprehensive assessment of the damage and needs. When we already have a presence in-country, our emergency response is significantly faster and more efficient. In this case, much more important is our deployment capacity and our local knowledge.

WHAT ARE THE MOST PRESSING NEEDS AFTER A NATURAL DISASTER?

Usually, after a natural disaster, there’s nothing left. Infrastructure may be completely destroyed. The priorities in terms of responding to the needs of communities are: access to clean drinking water, and food and shelter for those in need. Equally it’s also vital to take care of the injured and provide emergency care, including the treatment of psychological trauma. At Première Urgence Internationale we have the ability to meet all of these needs and to provide a multi-sector response.  It is vitally important, however, to coordinate with other agencies and to make strategic and informed decisions in order to deliver a high quality response to victims of this humanitarian crisis.