By continuing to use this site, you agree to the use of cookies. Cookies are used to suggest information based on your browsing patterns and to provide us with information about site usage. For more information and to manage these settings, click here
Home > News > A few days before Saint Nicholas Day

The conflict between Ukraine and Donbass region has been persisting for more than four years now and people are suffering repeated attacks every day. Novoluhanske village was recently hit by intense shelling. A life story. 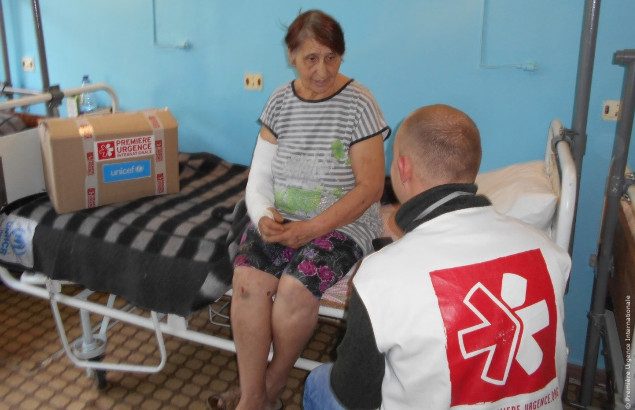 Conflict in Ukraine, an everyday life of war

This Monday, December 18 2017, life is going on as usual in the small Novoluhanske village of Bakhmut district in East Ukraine. One could hear the children laughs from the local house of culture, where they are celebrating with joy the upcoming Saint Nicholas Day. A bit further up, some of the grandmothers of the village are exchanging neighborhood gossips while sitting at their front porch.

But at 5 p.m., some artillery noises suddenly disturbed the peace of the place. First, no one paid much attention, such sounds sadly became a local norm. When suddenly, lightning and flames poured down from the sky.

« I didn’t even know for sure what was going on » shares Liubov, one of the grandmothers, still in shock.

Novoluhanske is located on the contact line between the area controlled by Ukraine and the one non-government controlled. Multiple rocket launcher systems just hit the village. More than 40 houses are destroyed in an instant. Eight people are injured, of which a 6 year-old girl. The school and the kindergarten are also hit but they were gladly empty, thanks to the preparation of Saint Nicholas Day.

Their name is Valentina, Serhii, Liubov…

That day, 78-year-old Valentina was taking care of her immobile disabled husband, Serhii, in their home. When the attacks occurs, they were first stunned by the noises and the flashes of light. Then, the walls started crumbling down on them, reveling the neighboring houses in fire. Valentina explains: “We started to crawl towards each other, trying to get out of the house. My husband’s leg was pinned down by a wreckage of the roof. Then, something fell down on my head”. Some minutes later, their son arrives at the scene and successfully manages to get them both out through a window of the house.

Liubov recalls rushing to the nearest hallway to take shelter from the missiles. Once the offensive ended, she remembers her neighbors hurrying to help a woman, wounded into her eyes. She explains: “at that moment, I was told I got wounded too. I looked at my arm, noticed it was maimed and I fainted”.

Starting from the day of the assault and the next day, the wounded were taken care of immediately, thanks to the support of Première Urgence Internationale in the hospitals all over the contact line. 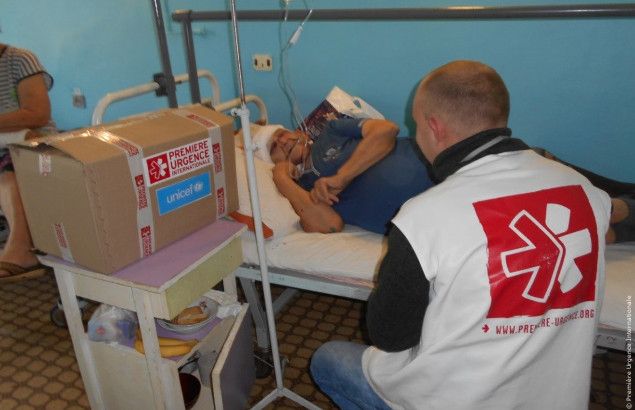 The son of Valentina and Serhii drove them to the hospital of Svitlodarsk where the medical staff, supported by Première Urgence Internationale, were able to treat them in emergency and provide them with the necessary cares for their recovery.

Liubov also went to this hospital. Doctors found a missile fragment that broke her elbow bone, which required an immediate surgery intervention. Shen then received a Première Urgence Internationale’s emergency surgery kit and was treated.

The conflict in Ukraine started early 2014 and caused many damages as well as a heavy human toll. (1). People residing at the line of contact remain deprived of secure access to health care, income sources, food, water, electricity and other basic social services and see no improvement of their living conditions and security situation.

Since 2015, Première Urgence Internationale’s teams provide answers to the primary needs of the most vulnerable populations. In a country where access to health care is expensive and difficult (2), current programs are giving access to free medicine for children under 5 years old as well as pregnant and lactating women. The programs make it possible to provide emergency medical kits to more than 12,000 beneficiaries all over the contact line through a system of health vouchers, in the most impacted zones, such as Avdiivka, Toretsk, Svitlodarsk and Krasnohorivka.

(2) According to a 2016 report of WHO, 25% of house budget are dedicated to doctors’ bills and medicines.
To learn more: http://uacrisis.org/60230-need-know-healthcare-reform-ukraine