By continuing to use this site, you agree to the use of cookies. Cookies are used to suggest information based on your browsing patterns and to provide us with information about site usage. For more information and to manage these settings, click here
Home > News > MASS DISTRIBUTION OF E-CARDS IN LEBANON

MASS DISTRIBUTION OF E-CARDS IN LEBANON 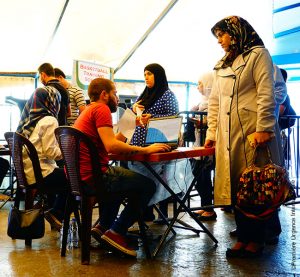 Solène Poureau went to Beirut in Lebanon on a mission for Première Urgence Internationale in her role as programme coordinator. She tells us about the distribution of debit cards destined for more than 40,000 beneficiaries at the end of 2016.

What are the debit cards that were distributed by our teams used for?

In Lebanon, humanitarian organisations often use ‘E-cards’, i.e. debit cards which allow resources to be transferred to vulnerable populations in the form of money or vouchers.

So each beneficiary receives a card and can buy food according to their needs, observing the programme’s guidelines.

What is Première Urgence Internationale’s role?

These distribution missions are being done in coordination with the World Food Programme (WFP) and the United Nations Refugee Agency (UNHCR) who we are partnering. Première Urgence Internationale are responsible for distributing the cards to the beneficiaries.

At the end of 2016, we organised a large-scale card distribution. The goal was to issue cards to more than 40,000 Syrian refugees in two and a half months.

We were responsible for hiring sites, such as football pitches for example, and coordinating distribution. So we had to encourage people to come, explain to them how to use the cards, hand them out and give each recipient a PIN.

This distribution work also gives us the opportunity to identify particularly vulnerable people when they come to pick up their cards. A UNHCR team can then work with them to look into caring for their specific needs.

What difficulties need to be overcome when distributing cards?

The challenge is to process lots of people in the same day without making people wait too long. While we are distributing cards, we also need to manage tensions that can rise when a crowd waits in the same place. For example, in the distribution at the end of 2016, we had to manage 1200 people arriving each day. It was quite a task.

Fortunately, our team worked really well, talking a great deal with the beneficiaries. So we could quickly calm tensions. There were even some heart-warming moments, particularly when some of our team members took over entertaining the children.