By continuing to use this site, you agree to the use of cookies. Cookies are used to suggest information based on your browsing patterns and to provide us with information about site usage. For more information and to manage these settings, click here
Home > News > Afghanistan: security remains a challenge for humanitarian workers

While the country’s political future remains unclear, its security situation is still an issue and makes humanitarian work complicated. Première Urgence Internationale, which has been working in Afghanistan for forty years, is focusing on working with local stakeholdersto carry on responding to needs. 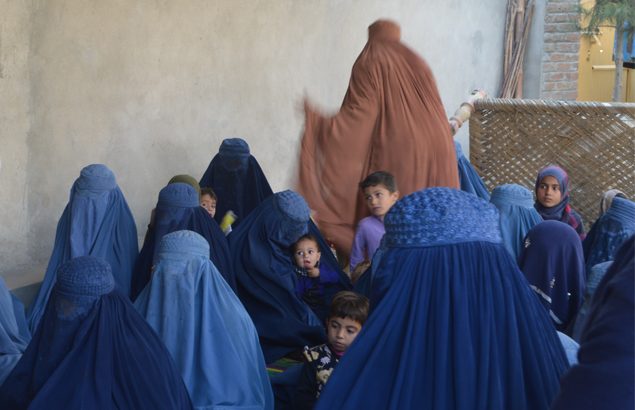 The country is one of the poorest in the world. Victim of an enduring crisis aggravated by more and more frequent natural catastrophes, the Afghan population is witnessing its fundamental rights being forgotten and its vulnerability worsening: limited access to primary health care, severe food insecurity, forced displacements, persisting common epidemic diseases…

Out of the 35.7 million inhabitants, 6.3 million people with no access to basic services are considered to be in immediate need. And 4.5 million of them are in urgent need of humanitarian aid.

Coordinating with other stakeholders

Responding to this complex and prolonged humanitarian crisis, Première Urgence Internationale concentrates on working in isolated areas. People are particularly vulnerable in these regions that are difficult to reach. The NGO provides emergency aid, especially in primary health, trauma care and nutrition, to more than 390,000 people.

But the presence of armed opposition groups interferes with the humanitarian response, sometimes resulting in work coming to a standstill. “We will carry on working in these areas where people’s needs are enormous, but with selected initiatives so that beneficiaries and our teams are not put in danger,” explains Laura Callot, Première Urgence Internationale’s Middle East programme manager. In Laghman province, between Kabul and Jalalabad, for example, the charity is training medical teams in traumatic stress support and patient stabilisation by simulating influxes of casualties in advanced treatment centres.

A little further southwards, in Nangarhar province, Première Urgence Internationale is supporting many health care facilities. At the hospital in Jalalabad, “We offer support with equipment and resources,” explains Laura Callot. “For example, we employ and train some of the medical staff at the hospital. We are helping improve hygiene conditions as well: toilet repairs, rebuilding water supplies, etc. Also, we have set up tanks on the hospital roof so that access to water is guaranteed.”

The charity especially uses its network of mobile clinics,  present in several provinces, to respond to primary health needs. “A coordination system with other international and local health stakeholders has been introduced. We share out the sites that need to be covered according to their priorities and our resources. The objective is to respond to needs more broadly and effectively. It works pretty well!” says Laura Callot. “Despite the security challenges, we manage to secure good access to rural areas. Our presence is well received. Local people know us and have confidence in us. Without such ties, reaching distant areas would be impossible.”

Preparing for political and climatic issues

Along with all the other important humanitarian problems in Afghanistan, natural catastrophes should not be forgotten. In 2018, an unprecedented drought in Herat province forced more than 260,000 Afghans to leave their homes. Première Urgence Internationale‘s teams provided emergency medical aid for three months in this western region.

For 2019, the United Nations predict an increasing of internally displaced persons due to the conflict and to natural catastrophes. Indeed, climatic changes and armed combats are a threat to civilians, forcing people to flee from the affected areas. The humanitarian consequences are disastrous, leading tens of thousands of people into critical situations. Access to basic services such as health, water, food and shelter is particularly jeopardised.

In 2019, Afghanistan can also expect significant political issues: presidential elections, which should take place by summer, and a peace negotiation process. “Depending on how these two milestones turn out, the humanitarian situation could either improve or else deteriorate badly. They will have a drastic influence on humanitarian needs, one way or the other.”

You can support our work in Afghanistan by making a donation. 94% of anything you can give will go directly to our teams out in the field.