By continuing to use this site, you agree to the use of cookies. Cookies are used to suggest information based on your browsing patterns and to provide us with information about site usage. For more information and to manage these settings, click here
Home > News > Yemen: “Now, my family and I have access to free quality healthcare”

Yemen: “Now, my family and I have access to free quality healthcare”

In recent months, Première Urgence Internationale has carried out a programme of renovation and modernisation of health facilities in the Hodeidah governorate in north-west Yemen. As a result of these activities, more than 16,000 civilians have had access to free health and nutrition services in modernised and secure facilities. 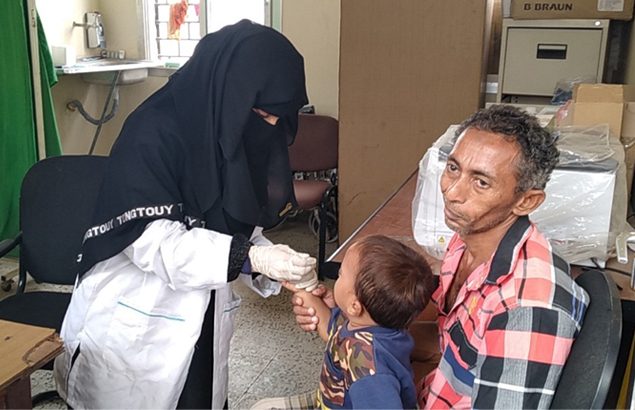 In Yemen, the health and humanitarian situation remains extremely worrying. The five years of conflict, still continuing, have exhausted and endangered millions of civilians: 75% of the population now depend on humanitarian aid. Food insecurity and severe chronic malnutrition are the main consequences of this emergency.

Première Urgence Internationale is intervening in Yemen on several types of projects: health and nutrition (deployment of health facilities, provision of labour), water, hygiene and sanitation (renovation of infrastructure), and food security (distribution of food parcels to the poorest families).

In the Hodeidah governorate, for example, the NGO supports three health facilities. Between October 2019 and February 2020, more than 16,000 people had access to free health and nutrition services.

“Healthcare and food baskets saved us”

Ahmed Yahya Qaderi, aged 32, is the father of a Yemeni family. The lack of economic opportunities and a long period of unemployment have left his household (7 people) very economically vulnerable. In October 2019, thanks to one of his neighbours, he learnt that he could benefit free of charge from the health and nutrition services of Première Urgence Internationale. So Ahmed Yahya Qaderi brought his daughter Fatima, who was severely malnourished, to have a consultation with the NGO’s doctors. After the diagnosis was confirmed, little Fatima was able to receive a treatment that led to her recovery a month later. The family was also able to benefit from a basket of food every month for 6 months, in order to improve the nutritional conditions of all members of the household, and to stabilise Fatima’s health. 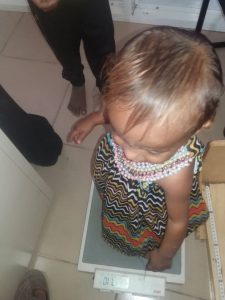 Fatima’s father expressed his gratitude to the medical teams. “Thanks to Première Urgence Internationale, my daughter was able to access essential health services free of charge. This care, and the free monthly food baskets, have saved us, especially in the current situation.”

“Before, there were no healthcare services in this centre”

Saleh Yussef Ali, aged 45, is also a father, with four children. During the winter of 2019, when he was earning a small salary as a casual worker, he learned from his neighbours that the Al Mansuriyah health centre had improved markedly and was now offering quality care, thanks to the intervention of Première Urgence Internationale. Shortly thereafter, in February, the father of the family fell ill with a severe fever. So he decided to go with his son, who was also ill, to the Al Mansuriyah health centre. On the spot, he was seen by a doctor who diagnosed him with malaria and prescribed free medication. His son, also examined by the doctor, was diagnosed with severe acute malnutrition and was immediately placed into the care of the Première Urgence Internationale teams.

A few weeks later, the father of the family took his pregnant wife for a consultation. She was suffering with an inflammation. After an examination by a midwife, Saleh Yussef Ali’s wife received medication, vitamins and advice on a healthy diet during her pregnancy.

The father explained that he had noticed changes in the quality and accessibility of the health centre: “Before Première Urgence Internationale intervened, there were no health services in this community centre, nor medicines. The building was neglected and dirty. If one of my family members was sick, I had to get to another centre, further away. I would have found it difficult to find enough money to pay for transport, the healthcare and the medicine. Thanks to the intervention of Première Urgence Internationale, my family and I now have access to nearby free health services in Al Mansouriyah, where we are treated with respect.”

Between October 2019 and February 2020, a total of 16,196 people were welcomed and cared for in the three healthcare centres supported by Première Urgence Internationale in the Hodeidah governorate. So, the renovation and improvement of these centres providesaccess to quality health andnutrition services to the local people.

All of these activities were set up by Première Urgence Internationale thanks to financial support from the United States Office for Humanitarian Assistance (USAID/OFDA).