By continuing to use this site, you agree to the use of cookies. Cookies are used to suggest information based on your browsing patterns and to provide us with information about site usage. For more information and to manage these settings, click here
Home > News > WHY IS YEMEN CURRENTLY IN THE GRIP OF THE WORLD’S WORST CHOLERA OUTBREAK?

WHY IS YEMEN CURRENTLY IN THE GRIP OF THE WORLD’S WORST CHOLERA OUTBREAK? 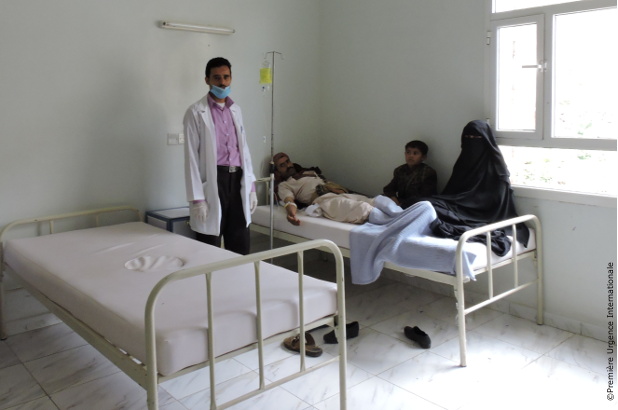 In a country ravaged by war, cholera has spread to nearly every governorate and the world’s worst cholera outbreak continues to spread.  Against a backdrop of unsanitary and perilous security conditions and a depleted health care system, Yemen is a fertile breeding ground for the spread of the disease.

Since April 2017, patients have been flooding into the cholera treatment centre at the Al Jabeen Hospital in Raymah.  Some patients are physically unable to move and are carried to the centre by their relatives where they spend several days in bed receiving vital treatment. Ondine, Première Urgence Internationale’s Programme Coordinator in Yemen explains, “In early June, we went from 9 to 11 beds and the need far exceeds this figure. Some patients are having to share a bed in order to receive treatment. Unfortunately the hospital isn’t able to accommodate more beds; given that the cholera treatment centre is located in a separate wing of the building in order to avoid the risk of contaminating other patients, capacity is limited.”

The country, at war for more than two years, is currently experiencing the world’s worst spread of cholera, with the number of suspected cases averaging 5,000 per day.  In just two months, the outbreak has affected 21 out of the country’s 22 governorates.

According to the World Health Organisation’s (WHO) epidemiological bulletin, published on 4 July 2017, since 27 April 2017, the start of the second wave of cholera (the first lasted from October 2016 to March 2017), cholera has claimed the lives of 1,614 people with more than 269,600 suspected and/or confirmed cases reported.  The world’s worst cholera outbreak continues to spread.

WHY IS CHOLERA SPREADING AT SUCH AN EXPONENTIAL RATE IN YEMEN?

Virtually the entire country is now affected by the outbreak. Several factors are involved in its rapid spread: conflict which has wreaked devastation on the country for more than two years, limited access to those in need, the security situation and the poor condition of the road infrastructure in remote areas of the country, the non-payment of health officials by the State for almost a year with almost half of the country’s health centres non-operational, the collapse of water supply services and unsanitary conditions which prevail in both towns and villages. In the capital Sana’a, rubbish has not been collected regularly for months.  Nearly 14.5 million people do not have access to safe drinking water, which has resulted in the disease spreading at a terrifying rate.  These difficulties are further compounded throughout the country by problems in procuring both medicines and medical equipment.

“People have little understanding of how this disease spreads and the steps that can be taken to contain it.  As a result of the war and the ongoing severe food crisis, the people of Yemen have grown weaker and find themselves in an increasingly precarious situation. Women, children and the elderly in particular are more vulnerable and therefore at greater risk of dying from dehydration, the main effect of cholera,” Ondine explains.

Since 24 May 2017, Première Urgence Internationale has supported the running of a cholera treatment centre in the governorate of Raymah where there are few health workers.  “We’re supporting its structural operation through the payment of compensatory bonuses for health care workers, the delivery of medical equipment and medicines, food for patients and their relatives as well as the transportation of those patients most severely affected by the disease to a hospital for care in the event of medical complications, such as kidney failure, for example,” says Camille Delorme, Première Urgence Internationale’s Mission Director in Yemen.

“We’re the only ones taking action in the governorate of Raymah and we have been able to respond swiftly.  We are also in the process of offering an additional aid response to those programmes already established in Sana’a.  But overall, authorities and aid workers are dealing with major funding challenges in the face of huge need,” concludes Camille Delorme.