By continuing to use this site, you agree to the use of cookies. Cookies are used to suggest information based on your browsing patterns and to provide us with information about site usage. For more information and to manage these settings, click here
Home > News > Ukrainians living on the front line

Ukrainians living on the front line

The conflict in Ukraine has been ongoing for 4 years and the situation faced by those living near the ‘contact line’ between the area controlled by the Ukrainian government and the non-government area is worsening day by day. 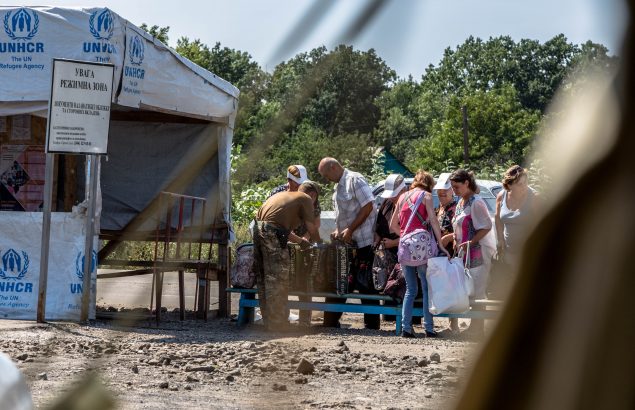 When Viktoria leaves her home, she sees a dark shape in the garden. Approaching it, she realises that it is the body of a soldier. She can’t tell where he was from. The military uniforms worn by different parties to the conflict are similar. The 65-year-old woman returns home to call the emergency services, then returns a few moments later. Another soldier then appears. He walks towards the body and bends over it. A quarter of a second later, the two bodies explode. This situation is no longer strange to Viktoria.

For the last four years, her life has been saturated with the sound of the mortars, the sight of the soldiers’ uniforms and the day-to-day shortages – power cuts and lack of access to healthcare. Her village in Ukraine is near the contact line that separates the area controlled by the Ukrainian government from the non-government area. It borders the front line, and Viktoria says that “the situation gets worse every day”.

The wait can be more than 24 hours

“Elderly people don’t want to leave the village where they have spent their lives,” explains Maria Artanova, field coordinator for Première Urgence Internationale. “That’s one of the reasons why some of them continue to live through the bombing, both in the government area and in the non-government area. They are forced to cross the contact line in extreme weather conditions and wait for hours. 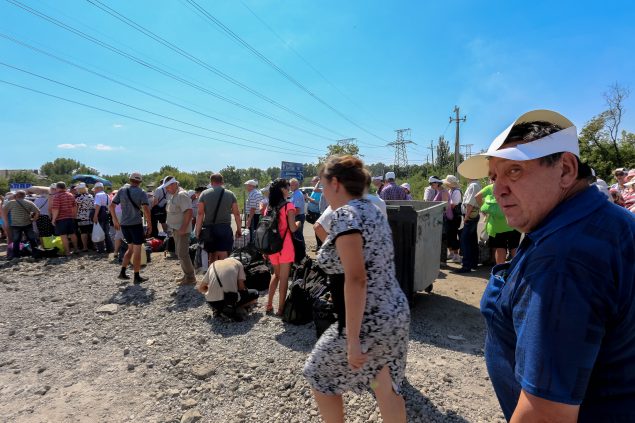 They go through inhuman suffering just to see their family on the other side, withdraw money or collect their pension.” Residents in Viktoria’s village receive support from Première Urgence Internationale teams, who have set up a medical unit near the checkpoint that provides access to the non-government controlled areas. “We maintain a daily presence to assist local people living in the village – who cannot access quality healthcare at local facilities – and also to provide primary healthcare to people crossing the checkpoint. Sometimes, the wait can be more than 24 hours, which is extremely difficult for vulnerable people.”

In a cabin, a Première Urgence Internationale doctor reassures a 90-year-old woman who arrived at the checkpoint crying and shouting. He brings her some water, reassures her that she is okay, and suggests that she sits down. “I want to go home”, she repeats. To cross the contact zone, residents must pass through customs and wait at a number of desks. To return to her home on the other side, the woman is missing a signature, so she must now cross back through the checkpoint. The elderly woman, panicked, throws her passport away from her. 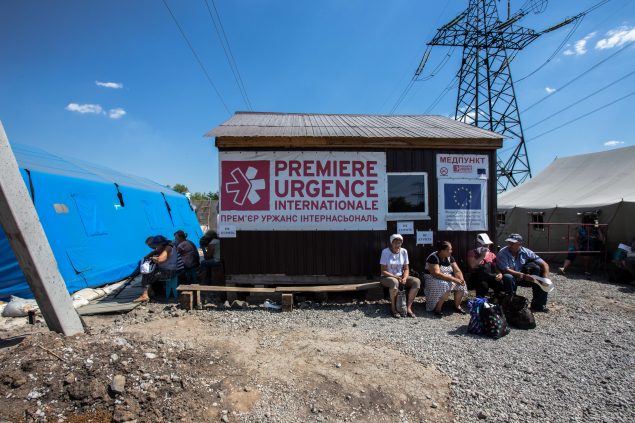 “This isn’t an uncommon situation here,” explains Maria. “Elderly people account for 60% of those who cross the contact area. The weather is difficult in summer and winter alike. People are often at their wits’ end. A few weeks ago, for example, we treated five people who had fainted, including one who had fallen and hit their head. They were referred to hospital for additional treatment.”

A mortar strike near a school

Maria remembers the time when, in mid-May, mortars fell between a school and a nursery in the village of Svitlodarsk. “Luckily, the main shot hit trees in a garden between the two buildings. But the school’s windows were still destroyed. The 375 children were quickly evacuated and there were no victims, despite the fact that many of them experienced psychological trauma as a result of the incident. Daily life is a struggle for the residents that have been living in this situation for more than 4 years.”