By continuing to use this site, you agree to the use of cookies. Cookies are used to suggest information based on your browsing patterns and to provide us with information about site usage. For more information and to manage these settings, click here
Home > News > UKRAINE EMERGENCY : How far will this war go?

UKRAINE EMERGENCY : How far will this war go?

On the 14th day of the Russian military offensive, the situation in Ukraine is critical. Assaults are increasing in several parts of the country, causing a growing number of deaths and injuries among the civilian population. Many buildings have been destroyed: schools, houses, roads. The people who stayed behind are striving to protect themselves the best they can in precarious shelters. In the meantime, hope of a ceasefire is fading by the day. 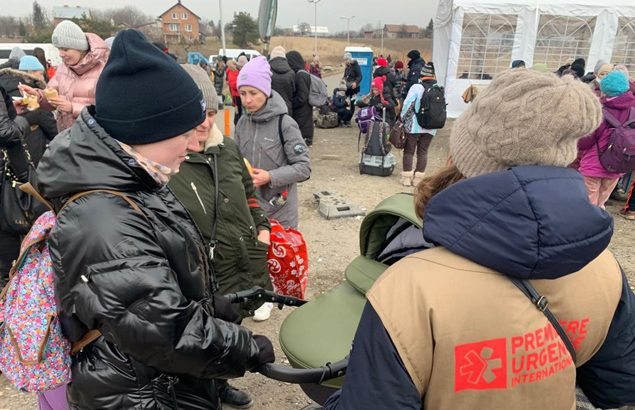 The attacks have led to significant population movements, some of whom have decided to return to other regions of the country still relatively unaffected by the hostilities, while others have opted to leave Ukraine.

The 2 million mark has been reached[1]. They have crossed the borders to reach Poland, Romania or Slovenia…

Tinou-Paï BLANC, Head of Mission for Poland at Première Urgence Internationale, is assessing the needs at the various crossing points along the border. “The people who will arrive in the next few days and weeks will be even more vulnerable than those we have seen so far. They will certainly arrive in an even more precarious state”.

On average, at least 5,000 vehicles[2] were waiting to cross the Polish border at the seven main crossing points, not to mention people travelling by rail or on foot.

A few kilometres from Medyka, a supermarket has been transformed into an emergency shelter for 2,000 people, mainly children with their mothers and elderly people. 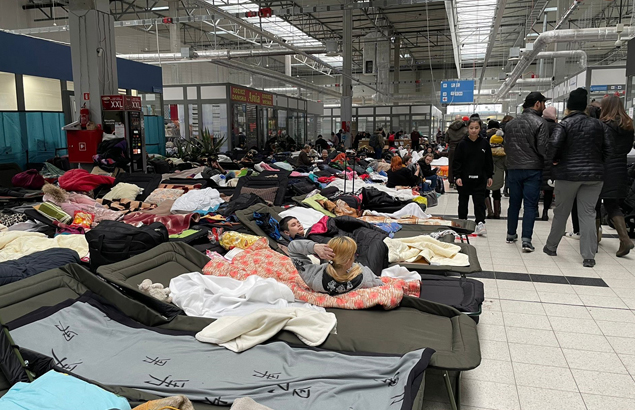 There are some unbelievable scenes, such as at the Medyka border post, where a pianist decided to perform a few notes of music to bring back hope, on a piano adorning the “peace and love” symbol. Families passing through stopped to listen to him play before heading on their way. Behind the gate, a whole family can be seen hugging each other, moved to the brink of tears.

Relief was rapidly organised, with volunteers, organizations and local authorities providing food and other essentials to the refugees. “It is important to coordinate humanitarian aid and to open emergency medical structures along the border in order to take care of patients suffering from chronic illnesses and other ailments”, explains Tinou-Paï BLANC.

Aid actors fear the situation will get even worse

Inside Ukraine, uncertainty is growing as the military offensive progresses. Première Urgence Internationale teams that have been operating in the Donbass are still in contact with the medical structures they have been supporting since 2015. The supply of medicines and other emergency medical equipment is already a major issue.

“Our teams, like the rest of the population, have to protect themselves and reduce their movements for safety reasons,” explains Olivier ROUTEAU, Director of Operations, “our challenge today is to be able to meet the multiple needs in the areas where the populations are located and to be able to work in safe conditions for our teams.”

The outpouring of generosity over the past two weeks has been remarkable. However, the challenge of providing for all humanitarian needs remains monumental. This aid needs to be coordinated between actors in order to be as effective as possible on the ground and to respond to the specific needs of the populations in the different situations.

Our teams are working to strengthen our on-going programmes. An emergency team has been deployed to Ukraine to address the needs of displaced people in the Lviv area.

In the Donbass, as in other parts of the country, our priority is to restore access to emergency health care, access to water and sanitation, and psychosocial support for vulnerable people, whether they are victims of the latest attacks or affected by the last eight years of “silent war”.

You can support our actions

Your contribution will enable our teams to continue our mandate to provide humanitarian assistance to the victims of the war in Ukraine and to provide essential aid to people who have fled to neighbouring countries.

Donate urgently for the civilian population.

[1] Office for the Coordination of Humanitarian Affairs (OCHA), 8 March 2022