By continuing to use this site, you agree to the use of cookies. Cookies are used to suggest information based on your browsing patterns and to provide us with information about site usage. For more information and to manage these settings, click here
Home > News > POLAND: FIRST EMERGENCY MEASURES IN PLACE

The advance of the Russian offensive in Ukraine has led to an increase in the number of people moving to neighbouring countries. Poland has become one of the theatres for humanitarian aid in the face of this massive flow of refugees. The teams of Première Urgence Internationale are working hard to respond effectively to the new vulnerabilities caused by these forced exiles, through measures linked to the security, mental and physical health of displaced populations. 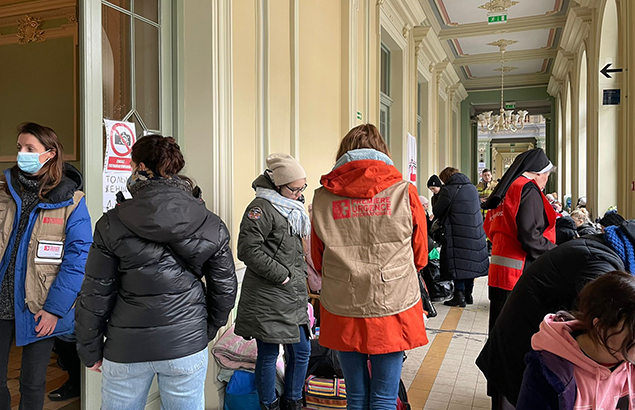 It is currently estimated that the number of refugees from Ukraine is rapidly approaching 2.7 million, of which 1.6 million have found refuge on Polish territory[1]. After passing through the different border crossings, these waves of refugees head for reception points such as the Przemyśl railway station, which has become a key transit point in Poland since the beginning of the Ukrainian crisis.

The Première Urgence Internationale team was able to gather the testimony of a young Ukrainian woman who arrived at Przemyśl station on Thursday 3 March. After spending several days in underground shelters and only being able to sleep a few hours a night, she decided to leave Ukraine to join her brother in Poland. Like most of the refugees who crossed the Polish border, she is already suffering from the psychological consequences of war and exile. She describes the suffocating and stressful atmosphere of her departure from the Kyiv train station: “There is no organisation, no one knows when the trains leave and where they are going. There are so many people. When the trains arrive, you only have a few minutes to get to the platforms and a mass of people rush to get into the cars. People are pushing each other, mothers and children are crying, it is total chaos. I tried to get on two trains before I finally managed to get on a third”. 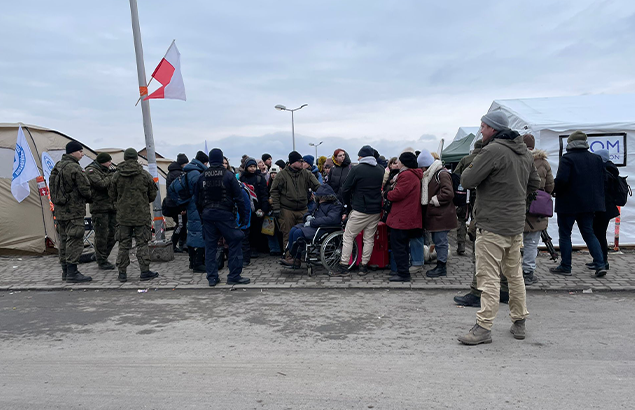 Thousands of women, children, elderly and disabled people arrive at these transit points, exhausted by the journey, anxious and carrying the bare necessities. The conditions of exile are harsh, as this Ukrainian refugee we met at the station explains: “I travelled in the train in total darkness to avoid being detected. We were asked not to use our phones in order not to be geolocated by the enemy. There are so many people that it is impossible to sit down, I spent most of my journey standing up”.

The physical and emotional disruption caused by war and forced migration is already being felt among refugees. Psychosocial care for these people is a priority, as is their access to shelters and basic necessities.

Several types of profile have been identified as being particularly vulnerable, especially those who do not have Ukrainian nationality. The Première Urgence Internationale team notes that the latter are experiencing great difficulties in getting access to the protection services and assistance deployed in the region. Furthermore, the vulnerability of the elderly is exacerbated by a lack of knowledge of new information technologies. Indeed, access to information is mainly through already overloaded social networks and websites.

The multidimensional nature of the vulnerability of populations will be at the core of Première Urgence Internationale‘s response. Each factor, such as age, gender, disability, nationality, leads to increased vulnerability to violence and physical and mental health problems. Our emergency teams are particularly attentive to facilitating access to assistance for all vulnerable people and to the implementation of appropriate measures to ensure the inclusiveness of the humanitarian response.

Within the framework of the Response Refugee Plan (RPP), Première Urgence Internationale collaborates with the United Nations High Commissioner for Refugees (UNHCR), international NGOs (MEDAIR, Action contre la Faim, HOPEProject) and national NGOs (Polish Red Cross, Polish Humanitarian Action, Ocalenie Foundation), as well as with volunteer associations (Grupa Granica). Together, we are striving to put in place an appropriate emergency response to provide assistance to refugees both at reception points and at border crossings in south-eastern Poland. 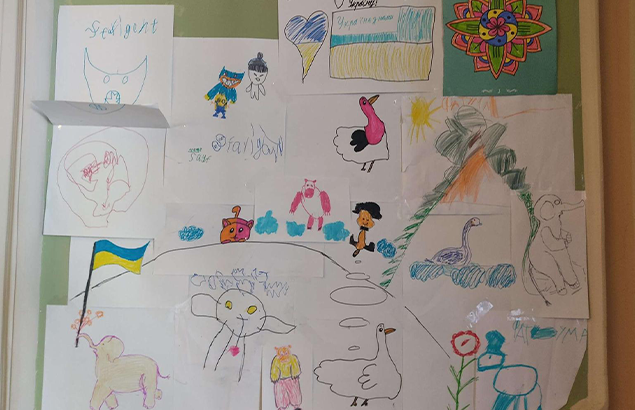 The purpose of Première Urgence Internationale in Poland is to prevent and mitigate the consequences of forced displacement on the security and mental health of refugees fleeing the Ukrainian conflict. Our emergency teams are mobilising to inform, guide and offer psychosocial support as well as an immediate protection response to people in exile in the various transit points, strategic arrival zones that currently lack structured humanitarian assistance services. On Thursday 11 March, the first psychosocial activities started in Przemyśl, in the train station and in the Tesco supermarket converted into a refuge centre.

YOU CAN SUPPORT OUR ACTIONS

Your contribution will allow our teams to continue our humanitarian assistance to the victims of the war in Ukraine and to provide basic aid to people who have fled to neighbouring countries.

Make an emergency donation for the civilian population.