By continuing to use this site, you agree to the use of cookies. Cookies are used to suggest information based on your browsing patterns and to provide us with information about site usage. For more information and to manage these settings, click here
Home > News > ‘Cascade’ training: working with, and for, communities

‘Cascade’ training: working with, and for, communities

Première Urgence Internationale has been working with local communities in Nigeria since 2016. In 2017, the teams implemented training sessions on nutrition. Rémi Alverhne, Food Security project manager, explains the ‘cascade’ training system this project is using. 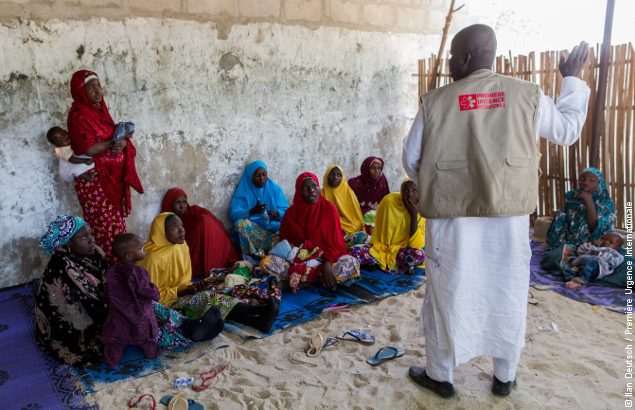 ‘In Nigeria, we are working in the Bolori II area in Maiduguri, in the northeast of the country. Faced with violence from armed groups, the region has had to deal with population displacements on a large scale. People settled in camps, and some have also found shelter among host populations in cities spared by the conflict. Food is a vital issue for these displaced populations. There are many cases of malnutrition, especially among children under 5 years old, and the most vulnerable people.

Families spend a lot of time and money to find ways to get enough food. To prevent cases of malnutrition, Première Urgence Internationale has launched a programme in communities to train them during malnutrition screening, by improving their knowledge of nutrition.

A PROJECT AT THE HEART OF COMMUNITIES

Our first goal is to detect cases of malnutrition early and prevent severe forms of this disease. But this seemed impossible without including the communities directly in our response.

Therefore, we have implemented community courses over several weeks. First of all, we select volunteers in the community in which we are working. In Bolori II, we have recruited about 50 people. We then train them in good nutritional procedures, particularly in relation to feeding infants and young children.

After being trained, volunteers will select mothers – mostly pregnant or breastfeeding – in their own communities, and will each set up two groups of 15 people. In these groups, mothers will then elect a ‘parent representative’ who will act as head of the group. The volunteers will go on to train these parent representatives who, in turn, will then be able to teach their respective groups of mothers.

So, we have volunteers who train parent representatives who will train groups of mothers. That is why we call it a ‘cascade’ system. It means the population can itself work to prevent malnutrition, which is the most effective way to limit cases.

With this project, initially only training 50 people, we managed to reach 1,300 mothers.

Community involvement also leads to a direct improvement and means that our work is sustainable. This system has led to long-term interest among the communities. It also enables women to become more empowered. As they receive their training together, these training sessions become times for them to bond with each other.