By continuing to use this site, you agree to the use of cookies. Cookies are used to suggest information based on your browsing patterns and to provide us with information about site usage. For more information and to manage these settings, click here
Home > News > The story of Senam Saturnin, a beneficiary of the reconstruction project in Boulata

The story of Senam Saturnin, a beneficiary of the reconstruction project in Boulata

Senam Saturnin is a 23-year-old Central African who lives in Bimbo 4 in the City of Peace neighbourhood. He is single and has a daughter. 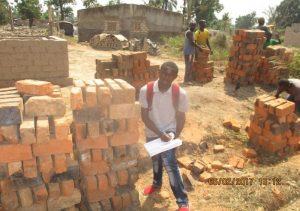 My father died in January 2013 during the fighting between Séléka and Anti-Balaka militias in Bangui. I had to give up my studies. With my brother’s intervention, I signed up for a range of professional training courses so I could find employment. As a result, I set up my own sewing and embroidery workshop.  Sadly, one day, members of an armed militia came into my workshop and took all my machines and work tools.  And so once again, I had no job.

I now work for Première Urgence Internationale. I’m responsible for supervising and distributing fired bricks. These bricks are distributed to beneficiaries of the house reconstruction project in the Boulata neighbourhood (in the 3rd urban district of Bangui).

Première Urgence Internationale’s work in the Boulata neighbourhood has made a huge contribution to the smooth return of those who were displaced and has encouraged reconciliation between the two communities in my neighbourhood, who have been in conflict with each other for a long time. What’s more, thanks to the organisation’s work, I’ve been able to earn enough money to meet my family’s daily needs. The work currently going on in the neighbourhood has also meant that roads have been opened between the KM5 and Boeing neighbourhoods. I would like Première Urgence Internationale to expand the area it works in to all of Bangui’s urban districts and across the whole of the Central African Republic.

Through my job at Première Urgence Internationale and the tasks that I’m given, I’ve become a very rigorous worker.

I have a number of plans, and most of all, I’d like to reopen my sewing workshop. Afterwards, I intend to work with my community to help educate the population. I also hope to be able to help returnees who have no humanitarian aid or support in Bangui’s neighbourhoods. I believe that through activities such as labour-intensive work,  improving water, hygiene and sanitation conditions and renovating all of the markets in the 3rd urban district, we can help the city. I hope that Première Urgence Internationale will continue its work in Boulata and in the 3rd urban district so I can continue to work with them on upcoming projects.