By continuing to use this site, you agree to the use of cookies. Cookies are used to suggest information based on your browsing patterns and to provide us with information about site usage. For more information and to manage these settings, click here
Home > HR news > «It had taken me 13 years to find it» 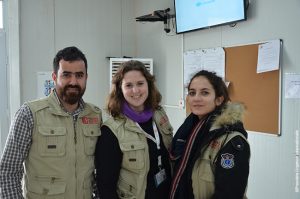 After having worked as a nurse for several years in France, Margot Vappereau decided to join the international aid sector. She spent 13 months in Iraq, working for Première Urgence Internationale and has come back firmly believing in this career choice.

What was your role within the Iraq mission?

I was the health technical manager in two camps for displaced persons in Iraq, one in Bardarash and the other in Dohuk. My aim during these 13 months was to ensure an improvement in the quality of primary health care in these camps through reviewing practices, training and implementing tools. Based on the needs that were identified, I was involved in developing projects such as setting up a mother and child unit that will shortly be opening. It will help mothers to access the health centre to attend awareness-raising sessions while being able to stay with their children in an environment exclusively dedicated to women.

What have you brought back from your experience there?

Honestly, I had no idea what to expect. I have discovered a lot: a different country, a different way of life and a new viewpoint: the humanitarian worker’s viewpoint. My experience as a nurse has helped a lot because I worked in the emergency department, and to work in the field is organised in a very similar way.

I have also learned a lot on a human level. I remember the story of an Iraqi man, which comes from Mosul and works with us in one of the camps for displaced people. He left Mosul to flee from the war and he told me all about abandoning his two-storey house, which is a symbol of a particularly comfortable life. Nowadays, he is nostalgic but happy that his family and him, are in good health. And even after losing so much, they welcomed me into their tent as if I was a member of their family. I felt completely at home there.

I also think I have become more mature during this mission and I feel that now I can control my emotions better. A humanitarian mission teaches you a lot about yourself. I had a sense of belonging, and it had taken me 13 years to find it.

What do you think will be your next move?

I would like to do more work in the field with Première Urgence Internationale. Now I know that this is what I want to do in life. If it’s possible, I would like to go to a different geographical area, Africa for example, for discovering another country and another culture.