By continuing to use this site, you agree to the use of cookies. Cookies are used to suggest information based on your browsing patterns and to provide us with information about site usage. For more information and to manage these settings, click here
Home > News > The crisis in Mali must be a wake-up call for a new response in the Sahel 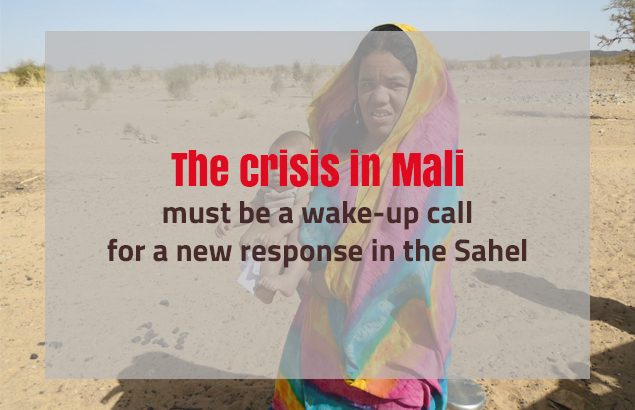 We call on the Malian authorities, the Economic Community of West African States (ECOWAS), the African Union and governments and institutions with influence in the region to ensure that any intervention puts the needs and rights of Mali’s most vulnerable people at its heart, and reinforces, rather than jeopardises, vital humanitarian, development, democratic governance, peacebuilding and human rights efforts in the country. Poorly-targeted sweeping sanctions are inconsistent with these aims, and instead risk penalising the entire population, hitting the most vulnerable, whose situation has already worsened in the wake of the COVID-19 pandemic.

The crisis in Mali is born of years of corruption, indifference, poor governance and alarming human rights violations by armed groups, self-defence militias and members of security forces with rampant impunity. This has caused widespread public discontent, distrust in the state’s authority and worsened the security situation. The prioritisation of a military response to a complex crisis, including massive attention and funding to the security aspects of the crisis, and countless new initiatives by the international community, has failed to protect civilians from atrocities, prevent further instability and alleviate inter-communal grievances.

The latest political crisis must be a wake-up call to Mali, the Sahel region and the international community that a new response is needed, radically refocused on populations’ needs, to address the growing destabilisation not only of Mali, but also of Burkina Faso, Niger and the wider Sahel region. Last month we came together as a new People’s Coalition for the Sahel to launch the ‘People’s Pillars’, setting out four key priorities that we believe must guide any response to the crisis in our region: protection of civilians, a comprehensive political strategy to address the root causes of instability, a massive increase in humanitarian aid, and accountability for violations by all actors. The recent events in Mali add a renewed urgency to our calls, demonstrating the futility of any approach that fails to put the people and the root causes of conflict at the centre of engagement.

In order to stabilise the country and restore the rule of law, we, as members of the People’s Coalition for the Sahel, urge the Malian authorities, ECOWAS, the African Union and other relevant governments and institutions with influence in the region to: