By continuing to use this site, you agree to the use of cookies. Cookies are used to suggest information based on your browsing patterns and to provide us with information about site usage. For more information and to manage these settings, click here
Home > News > Story from the field: Primary health care for vulnerable populations in northern Iraq

Story from the field: Primary health care for vulnerable populations in northern Iraq

Since August 2021, Première Urgence Internationale teams have been providing primary health care services to displaced people throughout Iraq. Abdullah, a nurse, tells us his story in one of the health centers in the north of the country. 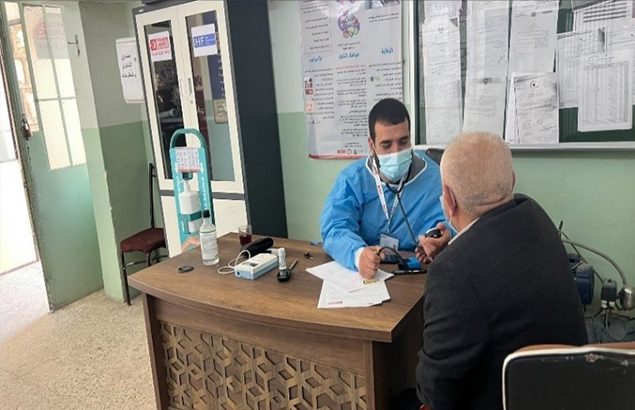 Since August 2021, Première Urgence Internationale has been providing comprehensive life-saving health care services and wellbeing throughout Iraq as part of a consortium of six NGOs supporting returnees, internally displaced persons and host communities. While Première Urgence Internationale’s activities are focused on Nineveh and Dohuk (in northern Iraq), the consortium covers half of Iraq’s 18 governorates.

Our teams support two primary health care centers and a mobile medical unit in Dohuk governorate, as well as two others in Nineveh governorate, where Première Urgence Internationale also supports health care centers. Abdullah, a 31-year-old nurse, works in one of these centers, located in the Sheikhan district. Thanks to his long experience in this health care facility, he has been able to see clearly the improvements:

“I didn’t know about the triage system because our primary care center had never implemented it before and we didn’t know how to triage our patients. I was treating everyone the same without knowing how to prioritize.”

According to Abdullah, the primary health care center was severely under-equipped, resulting in understaffing and poor hygiene. Staff were not trained in infection prevention and control (IPC) measures, and the facility was unable to provide adequate personal protective equipment (PPE) such as gowns, masks, or gloves. In addition, a lack of medication, medical equipment, and furniture made it difficult to provide quality patient care:

“Patients often complained and they were right. But it was difficult and frustrating to deal with them, because they would blame us and it was very stressful. Now that I’ve been trained in infection prevention and control measures, I can make sure we put them in place, which helps protect the patients and myself.”

At the Mahat health center, Première Urgence Internationale’s intervention focuses on building the capacity of staff to provide quality primary health care to those who need it most. As a key health staff at the facility, Abdullah has also received several other trainings. He is now able to manage emergency cases, screen patients for COVID-19, and redirect all suspected cases to a new isolation room, which was set up at the facility following infection control trainings. His connection and relationship with patients was also strengthened through training in communication methods:

“This training has made my job easier. I am now able to communicate better with all patients because I have developed skills to explain medical procedures, which allows me to guide the people I help more clearly.”

Abdullah is one of the 261 health workers who benefitted from the trainings conducted by Première Urgence Internationale health teams throughout this project funded by the Iraq Humanitarian Fund (UN/OCHA).

OUR ACTIVITIES IN IRAQ

Première Urgence Internationale has been working in Iraq since 1983. The objective of the current mission is to provide a humanitarian response to the needs arising from the population movements induced by the conflict with the Islamic State, by strengthening the existing health system and providing psychological and psychosocial support to vulnerable people, while increasing their access to shelter, drinking water, hygiene and sanitation.

In addition to supporting health centers and mobile medical units (which cover remote areas where vulnerable populations living in villages do not have access to health services), regular health awareness sessions are conducted by three teams of community health workers on a wide range of health topics. Première Urgence Internationale also directly supports the Iraqi Ministry of Health through five mobile vaccination teams, for the immunization of children under five years of age.