By continuing to use this site, you agree to the use of cookies. Cookies are used to suggest information based on your browsing patterns and to provide us with information about site usage. For more information and to manage these settings, click here
Home > News > “Sadly, we’re just sticking band-aids over the cracks” 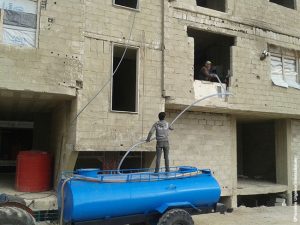 Emmanuel Tronc is Head of Mission in Syria for Premiere Urgence Internationale. He has worked with us for ten years. For over a year, he has been running a mission in a country devastated by war. Here, he shares this powerful experience with us.

Before you came to Syria, you worked in several other countries, especially in the Middle East. Is this mission different to the others?

There are some similarities with the mission in Iraq; the background and circumstances of the crisis, for example, as well as the actors involved and the source of the conflict – many of these are identical, although with a few local differences. For me, no other crisis is as interesting, complex and high-stakes as that taking place in the Middle East. Working in Syria has in some ways been the culmination of my career, in that I was working at the heart of the biggest crisis of the last few decades. It’s both fascinating and paradoxical, because it’s by being inside the country that you really get a clear picture of the parties involved, their specific interest in the conflict and all of the humanitarian problems that that causes.

What are the day-to-day issues that you have to deal with as a humanitarian aid worker in Syria?

Premiere Urgence Internationale has two strategies in Syria: we ensure we provide both an emergency response and a stabilisation response. In some areas, there is very active conflict and in others, we need to provide a humanitarian response to displaced populations and host communities before their standard of living falls to a level where it can be considered an emergency. Infrastructure, water, education, livelihoods, we try to provide the most appropriate responses to the needs which we identify on the ground.

It’s not an easy situation to work in. Our movements are restricted, humanitarian access is difficult and every intervention that we try to put in place requires huge negotiations. It can take weeks if not months to get one document. You really have to believe in what you’re doing and persevere. Working in Syria requires care and effort and a strong knowledge of the local culture. We have no room for error, and the fact that we have been here since before 2008, before the crisis began, means that we’re able to avoid a lot of mistakes.

As a humanitarian aid worker in Syria, do you start to feel powerless?

As an aid worker, you can’t help but be horrified by the array of needs that you aren’t able to respond to. However, our role is not to change the political order but to act to help those people affected by the crisis, even if, sadly, that means we’re just sticking band-aids over the cracks. And it’s because of this that I still feel that it’s absolutely necessary for us to intervene in this country.