By continuing to use this site, you agree to the use of cookies. Cookies are used to suggest information based on your browsing patterns and to provide us with information about site usage. For more information and to manage these settings, click here
Home > News > The management of the world’s largest refugee camp

The management of the world’s largest refugee camp

Since 2017, nearly 700,000 Rohingya fled the violence and persecution in Myanmar to seek refuge in Bangladesh, particularly in the Cox’s Bazar area where a “mega camp” was formed in Kutopalong. After a long journey in the wilderness, thousands of families are reaching this camp, exhausted, sick and in dire need of protection and humanitarian aid. 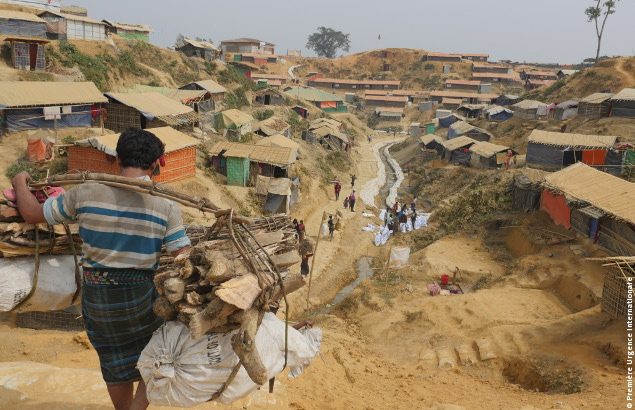 Six months have passed since 700,000 Rohingya refugees arrived in the Ukhia region, in Bangladesh. In a few months, Kutupalong camp became the largest refugee camp in the world, outdistancing by far the nearly 250,000 residents of Kenya’s Dadaab refugee camp, up to now the largest in the world.

Living conditions are unbearable there. The Rohingya live together in this “mega-camp“, in temporary houses, built with materials that were available at the moment, i.e., tarpaulins and bamboo. The emergency: the management of the camp, which has literally become a city. « We have to realize: managing this camp would mean managing a city the same size as Lyon but with very little means, just willing workers and in a few weeks », explains Erwan Le Grand, development and intervention support director at Première Urgence Internationale.

Rohingya are not giving up

Indeed, the camp does not lack workers. Despite the horrors they have experienced, the Rohingya do not give up and show impressive resilience and adaptability. Solidarity is on the move. Every day, thousands of men and women work together to try to address the difficulties and organise the unorganisable. 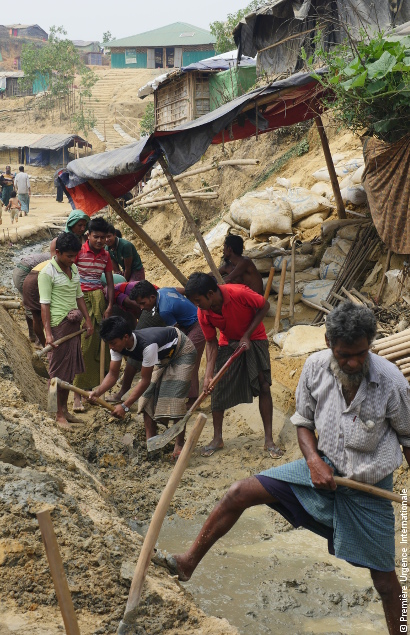 The structure of this camp is very complicated for the humanitarian actors on site, also. The geographical division of the camp continues to evolve. The coordination issues are multiple, conditioning the success of this crisis management.

In order to guarantee an effective dialogue between the different actors, Première Urgence Internationale is supporting the management of two areas of the camp. Within this setting, the teams take care of the development of the site, the adaptation and the efficiency of the services as well as the coordination between the actors present on the site, in an approach based on protection and on the support of specific needs of the most vulnerable population.

A crisis beyond present time

Upon arriving at the camp, Rohingya families are welcomed by humanitarian teams, that provide with construction kits, food and non-food items such as blankets and pans. Then they are accompanied to their assigned area where they can, finally, find some peace.

For those who reach the territory, after atrocious violence and a long exodus, the arrival represent a way out. The present is the only thing that matters to them. Their priority: take their place and eat every day.

However, for the associations working on the camp, time is running out. They are constantly searching for a more viable and sustainable solution. 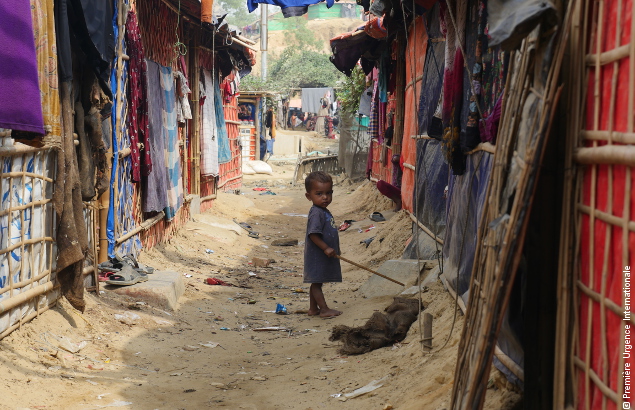 Floods are threatening more than100,000 people

The camp has been built during the emergency, without a logic of durability. “There are no satisfying options in a camp like that. It is impossible to do something perfect. The only thing to do is to propose other solutions, to open camps in other areas. That would allow this area to be less dense in population “, Erwan conceives.

In April, it is the monsoon season in Bangladesh. According to a UN report of 29 January, landslides and floods threaten about 107,000 people in the camp (1).

The only solution would be to close the current camp and to suggest people to move to larger areas, in smaller camps. “We are talking about 700,000 people to relocate in one month in Bangladesh, which is one of the most densely populated countries per square meter.”

The Bangladeshi government has allocated 2,000 acres (809 hectares) of land for a new camp in Ukhia, but unfortunately, it is still not enough.