By continuing to use this site, you agree to the use of cookies. Cookies are used to suggest information based on your browsing patterns and to provide us with information about site usage. For more information and to manage these settings, click here
Home > News > “Prior Coordination Area”: a common strategy for Israeli settlers to force Palestinians off their land

“Prior Coordination Area”: a common strategy for Israeli settlers to force Palestinians off their land

[Infographics] In the West Bank, Première Urgence Internationale continues setting up protection activities, to defend the rights of Palestinians. In spite of the COVID-19 pandemic, Israeli settlers’ violence keeps increasing in the Occupied Palestinian territory. This is part of a common strategy of illegal appropriation of land: see our explanatory comic strip.

Today, around 700,000 settlers are illegally living in Israeli settlements, in the West Bank and in East Jerusalem, violating international law. The most violent settlers frequently attack Palestinian civilians, targetting specifically the communities near (or outpost) their settlements, as well as the farmers and Bedouins who work in their land or bring their animals to pasture.

These attacks, extremely violent and sometimes even fatal, are often concentrated in the same areas, aiming at discouraging Palestinians from accessing it. The Israeli army (the only one armed force allowed to enter these areas) turns a blind eye to settlers’ violence, or even sometimes participates in it.

In this type of repeated attacks targetting Palestinian farmers, the Israeli armi intervenes but – instead of investigating and arresting the offenders – takes measures to limit the access of Palestinian to their own land. These « prior coordination areas » become unaccessible to their owner, who will only be allowed to access their land a few days per year, on planting and harvesting periods, in particular for olive trees.

Meanwhile, the Israeli settlers can then enter the area without trouble, and are able to steal trees and crops, preventing farmers from taking advantage of their own harvests. When the farmers have no other option than being forced to give up agriculture for their livelihood, settlers occupy the land in all impunity, aiming at constructing new settlements or outposts.

Settlers’violence has been increasing over the past years, and more recently over the past weeks, taking advantage of the restrictions linked to the COVID-19 epidemic, to step up their violence against Palestinians and their property and seize more land.

Now that the planting period is starting, Première Urgence Internationale’ teams fear a new wave of violence, that would aim at discouraging Palestinian farmers to cultivate their land. 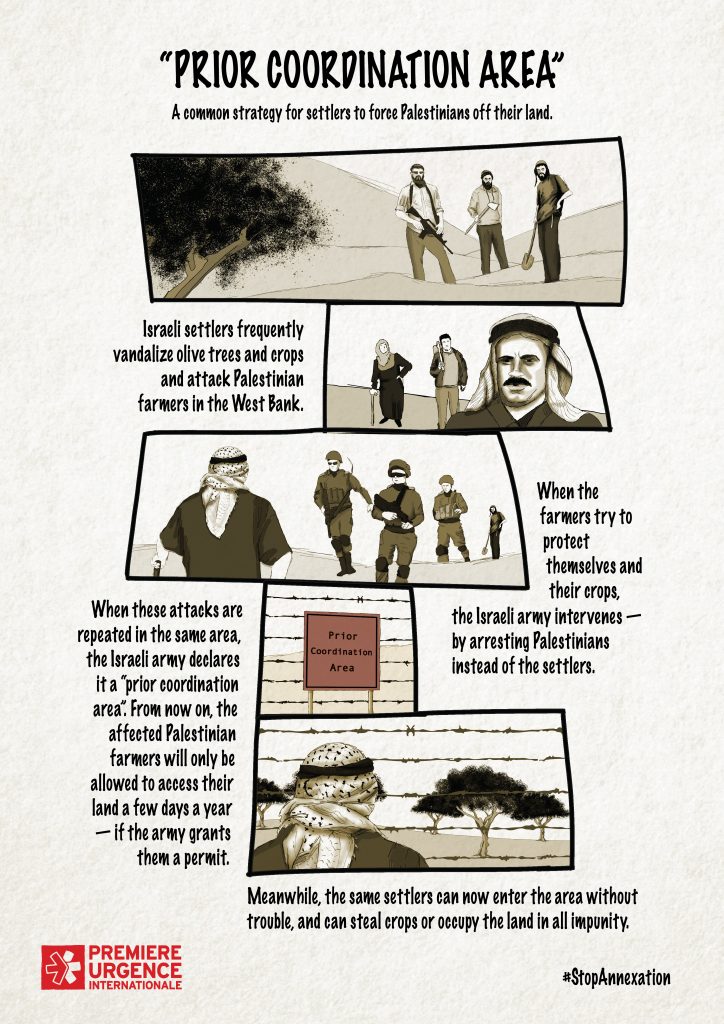