By continuing to use this site, you agree to the use of cookies. Cookies are used to suggest information based on your browsing patterns and to provide us with information about site usage. For more information and to manage these settings, click here
Home > News > PREMIERE URGENCE INTERNATIONALE DEPLOYS MOBILE MEDICAL UNITS TO INFORMAL CAMPS IN WESTERN IRAQ

Première Urgence Internationale is helping displaced people in Central and Southern Iraq by providing health care, including mental health services, to displaced communities. Khaerya, a 67-year-old Iraqi woman living in Kilo 18 informal settlement (Anbar), was able to receive a treatment after visiting one of our Mobile Medical Units. 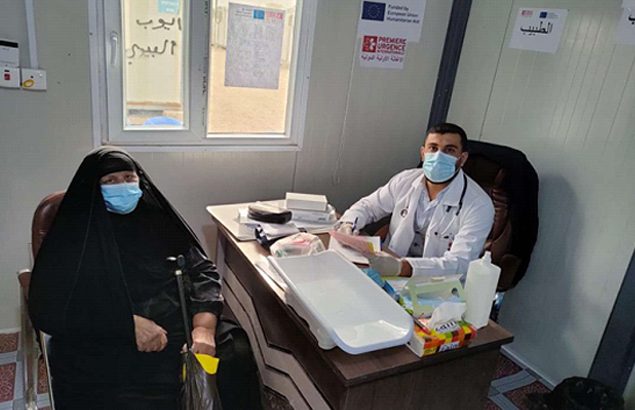 On November 18, 2021, Khaerya, a 67-year-old Iraqi woman living in the informal settlement of Kilo 18 (Anbar governorate), gave a first visit to one of the mobile medical units (MMUs) run by Première Urgence Internationale teams. This mother of nine children and grandmother of many more fled her home six years ago with her family because of the active conflict between the Iraqi army and ISIS in the area. With no possibility of working and no financial income, the family first took refuge in the Al-Habania camp before moving to the informal settlement of Kilo 18, where Première Urgence Internationale provides quality primary health care services to the population, including mental health services.

After a first consultation with the MMU doctor, the diagnosis was made: Khaerya is suffering from chronic hypertension and heart disease. Medication is immediately prescribed and Première Urgence Internationale refers the patient to Al-Ramadi University Hospital. The cardiologist confirms the presence of ischemic heart disease and, in agreement with Première Urgence Internationale’s doctor, decides to send Khaerya to Al-Fallujah University Hospital, in order to carry out a necessary non-surgical intervention. PUI team facilitates the transportation to the hospital, and back to Kilo 18 informal settlement a few days later. Since her return, this Iraqi woman – who says she is relieved to no longer feel pain and to be able to resume her life and continue to support her family – has been seeing the Première Urgence Internationale doctor once a week, in order to follow up on her condition and to take the prescribed medication.

Kilo 18 used to be one of the largest displacement camps in Iraq, inhabited by about 1,600 families who were displaced from their areas after ISIS took control of several cities in Anbar. Following a campaign facilitating the voluntary return of families to their areas of origin, the government shut down the camp in 2018, which means all support stopped, although the informal settlement continues to hosts approximately 820 IDPs, mostly living in caravans and tents. Inside Kilo 18 the roads are not paved and all basic services are provided by local and international NGOs, in addition to one school supported by a UN agency.

In Kilo 18, under a project funded by the European Union Humanitarian Aid (ECHO), Première Urgence Internationale operates Mobile Medical Units (MMUs), in order to provide quality primary health care services to the population, including mental health services. Première Urgence Internationale also implements community health activities along with family and community supports as well as awareness campaigns on Health and Hygiene. In informal settlements of Anbar and Baghdad governorates, Our teams have already provided more than 25.000 primary health care consultations and provided training sessions to 81 professionals on a wide range of health-related topics. In addition, more than 22.000 individuals have been reached by the Health and Hygiene awareness campaigns.

Find out about our humanitarian activities in Iraq.