By continuing to use this site, you agree to the use of cookies. Cookies are used to suggest information based on your browsing patterns and to provide us with information about site usage. For more information and to manage these settings, click here
Home > News > Première Urgence Internationale at the Brussels III conference

Première Urgence Internationale participated in a conference about the future of Syria held in Brussels from March 12 to 14. This event organized by the United Nations (UN) and the European Union aimed at “supporting the Syrian people and mobilizing aid from the international community”. Together with around 500 stakeholders, the conference was an opportunity for humanitarian NGOs to reaffirm their positioning in the region and remind their guiding principles. 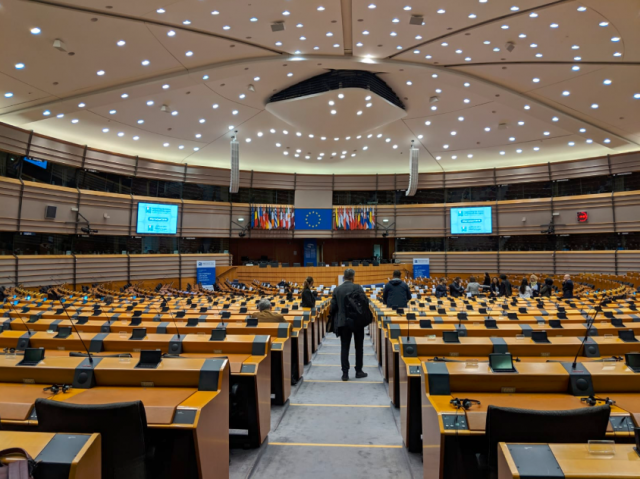 While the conflict starts its nine year, more than 5.6 million Syrians are still refugees. The majority is received by neighboring countries, often in precarious living conditions. In the meantime, more than 6 million persons have also been internally displaced within Syria. 83% of them live in extreme poverty according to the UN. Besides discussions about a political solution, “Première Urgence Internationale, together with the other NGOs in attendance, wanted to remind that humanitarian needs remain tremendous. The vulnerability which comes out for million people is more than worrying.” declared Olivier Routeau, Director of operations at Première Urgence Internationale and present at the conference.

Our teams have been intervening in the region since the beginning of the crisis. In Syria as well as in neighboring countries: Iraqi Kurdistan, Lebanon and Jordan from 2013. Our action has for only criteria vulnerability and humanitarian needs of populations, both physical and psychological. Première Urgence Internationale’s work is elaborated in virtue of an integrated strategy aiming at responding coherently to all these needs. “This support to refugees and displaced people gives us an overall comprehension of the needs and problems faced by these populations today.” reminds Valentine Adolphe, regional manager for the Syrian crisis at Première Urgence Internationale.

It was also an opportunity for NGOs to recall the nature of their involvement and the international humanitarian law’s principles.

Like others, Première Urgence Internationale wants to remind that international commitments which bind States regarding humanitarian aid are unilateral. Consequently, the non-respect of such commitments by a State does not allow another one to withdraw from its own. Furthermore, humanitarian action is conceived to support needs of vulnerable populations and not political objectives. In this sense, we reaffirm our opposition to any politicization of humanitarian aid. The heart of our work is implemented at two levels: responding to emergency situations and helping people rebuild their life. “We recall the involved States that humanitarian activities cannot be exploited to favor political purposes.”, declares Valentine Adolphe.

Regarding potential returns to Syria, Première Urgence Internationale and other NGOs have maintained that these movements must not be forced. “If returns are observed, they are to be accompanied. Every initiative must be carried out freely. Humanitarian aid must keep being provided inside and outside Syria. In any case it must be used to incite, directly or indirectly, refugee populations to go back to Syria.” concludes Olivier Routeau.