By continuing to use this site, you agree to the use of cookies. Cookies are used to suggest information based on your browsing patterns and to provide us with information about site usage. For more information and to manage these settings, click here
Home > News > NIGERIA “Barely 25% of needs are covered by humanitarian aid”

NIGERIA “Barely 25% of needs are covered by humanitarian aid”

Elsa Softic is Emergency Officer at Première Urgence Internationale. She participated in the exploratory mission in Nigeria in December and last January and she is currently in the country for the official opening of the mission. For her, the presence of our NGO is essential considering the scope of the humanitarian needs.

What is the context in Nigeria?

Nigeria is the most populous country in Africa with near to 200 million inhabitants. It is also the first economy of the continent. Even though it has many natural resources, the country shows large disparities, particularly between the richer and more developed south, and the north already weakened by the Sahelian climate and the recession of Lake Chad, left aside by public policies and the successive governments.

This underdevelopment has generated a fertile ground for the terrorist group called « Boko Haram » which was able to rapidly spread. Established in 2002 in Maiduguri in the Borno State in north-eastern Nigeria, the group, that built itself around the popular rising before the State’s abandonment and the corruption accusations of local leaders, is multiplying attacks against the State’s symbols. In 2011, the group grew more radical, and began to attack civil populations of the Borno State. These attacks caused successive waves of population displacements until a peak in 2014 and 2015. Today, we estimate that 3 million people have fled their villages and are internally displaced. 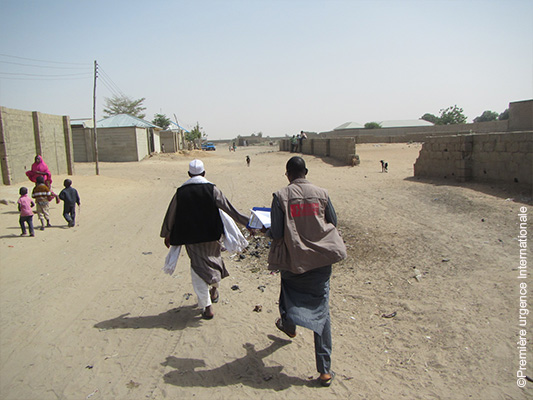 First of all, we led an exploratory mission from last December to February in order to understand the humanitarian situation and meet our partners who were already in the field. What we saw over there was far beyond/worse what we had expected. The town of Maiduguri, that ordinarily counts 2 million inhabitants, welcomed over 1.7 million displaced people. Its population nearly doubled in one year, which applies pressure on the resources, especially on food.

As a matter of fact, the primary need of populations, may they be displaced or host, is access to food. We also noted problems of access to water and sanitation.

Première Urgence Internationale chose to assist the vulnerable population of the Flour Mills neighbourhood of Maiduguri through a 6-month food aid programme addressed to 1 000 households.

In spite of the increasing presence of actors in the field, we estimate that barely 25% of needs and covered by humanitarian aid.

Today, for security reasons, the humanitarian actors have very difficult access to zones outside of Maiduguri. Rural zones of the Borno State count as many people as Central African Republic!