By continuing to use this site, you agree to the use of cookies. Cookies are used to suggest information based on your browsing patterns and to provide us with information about site usage. For more information and to manage these settings, click here
Home > News > Mali: How Première Urgence International helps to improve access to primary healthcare in Bankass

Since the start of the 2012 political-security crisis in the north of Mali, the uncertainty and deterioration of the situation have progressively touched the centre of the country. The crisis hit the Bankass Cercle, in the centre of Mali, with full force. Consequently the cross-community conflicts and the active presence of armed groups from the opposition have triggered a general instability in this area. This lead to a decline in healthcare coverage in the region of Mopti. Around the Bankass Cercle a shortage of financial, human and material means to supply healthcare has been observed, which raises the vulnerability of the host population and of the internal refugees. 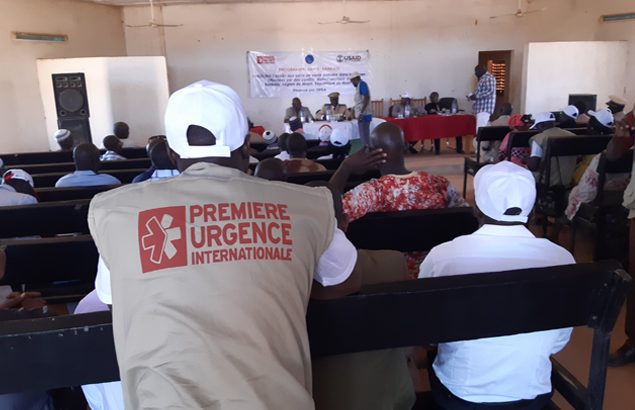 Kick-off workshop held on December 12th on the Première Urgence Internationale project regarding access to primary care in Bankass.

Première Urgence Internationale held the kick-off workshop for the new project on Thursday 12th December 2019. «This is an opportunity to congratulate and thank Première Urgence Internationale for their continuous commitment to our severely tried people. We support the NGO for the unfailing help to the administrative and political authorities of Bankass Cercle in reaching the fixed goals of the project», emphasized the first deputy of the Bankass Cercle Prefect at the opening of the workshop.

This project aims to re-establish access to primary healthcare in the areas impacted by the conflict. First of all the goal is to bring an immediate response to the crises for the displaced people, offering emergency healthcare to the most vulnerable ones (children under 5 years old and nursing mothers). Then, as a second step, bring a more structured solution developing the potential and autonomy of the defective local health system.

THE IMPACT OF A MULTI-SECTOR CRISIS

In 2012 the independentist movements in the North and the military coup overthrowing president Amadou Toumani Touré have plunged the country into chaos. Since then the security, political and economical crisis led to an armed conflict and to the decline of the State’s presence in the northern and central regions.
The Bankass Cercle covers an area of 9 504 km² with an estimated population of 351 851. This area is currently living a serious deterioration of the security situation. It is, as a matter of fact, victim of significant cross-communitary conflict, worsened by the weak presence of regular armed forces, easy access to weapons and by the presence of armed groups of the opposition intervening in pre-existing conflicts.

Fearing the multitude of armed attacks the population is afraid of moving to get access to basic social services in the region. Therefore when these attacks against the habitants happen, they cause massive migration in the community, augmenting their vulnerability. According to the reports by the Commission Mouvements de la population (CMP), between March 1st and November 30th 2019 the number of displaced people more than doubled, going from 31 590 to 71 723 internal displaced in the region of Mopti. In this region they presently represent 35.6% of the internal displaced in Mali, and 17.4% or 12 596 of these internal displaced of Mopti come from Bankass. Furthermore the basic services are highly affected by the increased structural shortcomings (loss of qualified human resources, drop in financial capacity of the healthcare centres, etc.). This situation is a blow to healthcare and food security for the local community, where 36.6% of households live in food insecurity according to the National Nutritional and Retrospective Mortality Survey conducted in 2019 following the SMART method. In turn this context particularly affects children under 5 years of age, pregnant women and nursing mothers.

Première Urgence Internationale carried out an evaluation of healthcare needs in the Bankass Cercle in December 2018 and observed a significant drop in service use between 2017 and 2018 and a 64% drop in curative consultations. 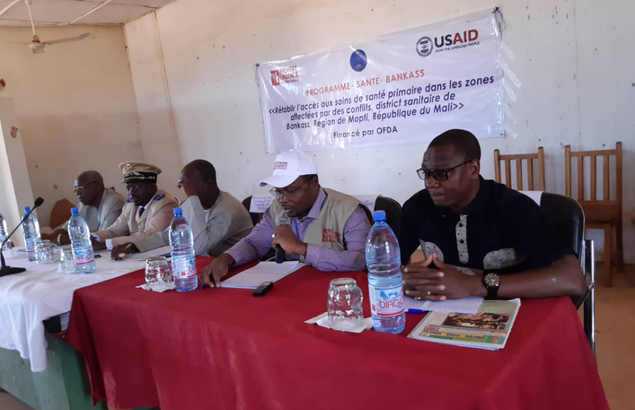 Our field associates during the kick-off workshop of the Première Urgence Internationale project on access to primary healthcare services in Bankass.

Première Urgence Internationale can directly intervene in remote areas supporting hard to reach communities. The local population appreciates the intervention of the NGO thanks to its transparency, its strong confirmation of neutrality, the high quality of the implemented programs and good community participation rate.

Première Urgence Internationale presently supports 10 healthcare centres in the Bankass Cercle, holding trainings and supervising healthcare agents and community relays for a continuous reinforcement of their potential. Moreover, in December 2019 the healthcare agents in these centres have been trained on the medical care for victims and survivors of gender based violence and a training on the management of biomedical waste has been organized in February 2020 to the benefit of hygienists in the covered healthcare centres.

Additionally, support of healthcare centres and the deployment of mobile clinics distribute access and provision of primary health care and quality food to about 141 800 people, of which 52 000 of the more vulnerable have right to free assistance.

Première Urgence Internationale is also in charge of the monthly supply for medication and equipment, and financially supports the personnel to assure the free healthcare for beneficiaries targeted by the project.

Thanks to the mobile clinics in place, Première Urgence Internationale guarantees access to care for people leaving more than 15km from a healthcare centre. This way the teams are able to bring a quick and suitable solution to respond to the emergency of this crisis and the people running from the armed attacks in the Bankass Cercle.

SUPPORTING TO GET BACK TO AUTONOMY

This event held in the performance hall of the youth center in Bankass regrouped 68 people, including administrative authorities, local elected officers, the district middle management unit, the technical directors of various GSCOM, civil society and NGOs.

This project has been made possible thanks to the generous support of the funding of the United States and the American people (USAID/OFDA).
You can support our action in Mali with a commitment through donation for our NGO. 94% of our donations are allocated to our field missions and you can benefit from a reduction of 75% on the total amount of your donation (with a limit of 530€ – beyond that the reduction will be of 66%).

The contents of this article are the responsibility of Première Urgence Internationale and do not necessarily reflect the views of USAID / OFDA or the government of the United States.