By continuing to use this site, you agree to the use of cookies. Cookies are used to suggest information based on your browsing patterns and to provide us with information about site usage. For more information and to manage these settings, click here
Home > News > In Ile-de-France, connect slums to drinking water

The spread of COVID-19 is slowing down in France, but Première Urgence Internationale is continuing its emergency response in Ile-de-France in favour of the most vulnerable people. The organisation’s action is based on two components: health and access to water and good hygienic conditions. 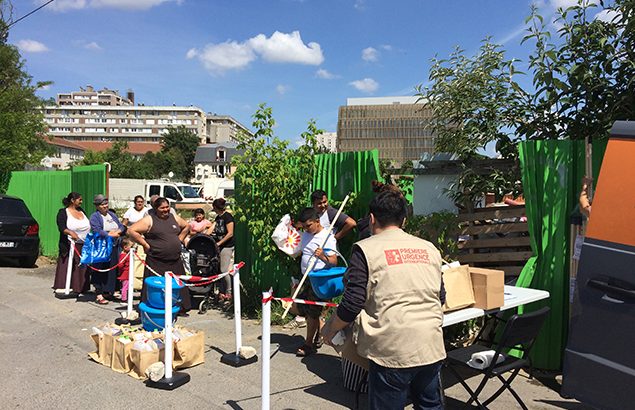 Through mobile clinics, the teams from Première Urgence Internationale have been crisscrossing several Ile-de-France departments since the start of containment. They are going to squats and slums[1] to raise awareness about COVID-19 virus. On the ground, the organisation’s teams were able to assess the conditions of the population living in these places, and intervene to give them access to water and a minimum standard of hygiene, to avoid the rapid spread of the virus.

During this health crisis, many French women and men were able to rediscover the importance of running water, which is fundamental to preventing the spread of the disease and to practice basic barrier actions. But “access to water is also a fundamental and essential right”, recalls Emilie Sevestre, Technical manager for water, hygiene and sanitation for the French mission of Première Urgence Internationale.

Yet, according to a UNICEF report, in mainland France, more than a million people live daily without permanent and affordable access to drinking water. Many of them live in squats and shantytowns, and according to an evaluation of the national health mediation program, in only 15 places out of 53, the inhabitants have access to drinking water (from a point on site or less 5 minutes on foot).

Emilie explains the different phases of Première Urgence Internationale intervention in squats and shantytowns, to create the hygienic conditions necessary for virus prevention.

The assessment consists of the analysis of access to water on the site, and the detailed count of those present: the age of the people, number of children under 5, gender, etc. This evaluation is essential to better adapt the distribution of hygiene kits in the next phase.

I have worked in refugee and IDP camps in the Central African Republic and Bangladesh, and hygienic conditions are just as much of a problem in slums and squats in France. The intervention, on the other hand, is completely different here: access to water and authorisations must go through the State and sometimes approaches to the authorities make the investigation slower.

After an initial assessment phase, it is important to act urgently, ultimately allowing these people to have daily access to running water. The prefects and communities have the responsibility in particular to ensure that access to water is made possible for all the populations living on their territory, including in precarious conditions.

NGOs have a watch and alert role: they can alert town halls about the inaccessibility on the ground, and push them to intervene. This allowed the emergency installation of water points in almost all of the grounds we visited during the pandemic. When a slum is located on two different territories we need two different authorisations: this is an example of what happened within one of the slums where we operate and for which we are still awaiting permits.

The city hall were very proactive in the emergency response. On-going to Vitry-sur-Seine (94), for example, where there is a shanty town inhabited by 234 people, without access to water. I alerted the city hall in the morning, and the next day the site was connected to drinking water.

You have to pick up the phone, and people answer most of the time. Like us, as a non-profit organisation, we are neutral, it matters. In addition, we are in a health crisis, so everyone is trying to participate to the emergency.

In Villejuif (94), there was no possibility of installing water taps in the squat. There was a container with water that was undrinkable, the city hall decided to distribute water packs. This is an example of action, an alternative in an emergency, from a municipality where we did not have to intervene. Waiting for something better to put in place. 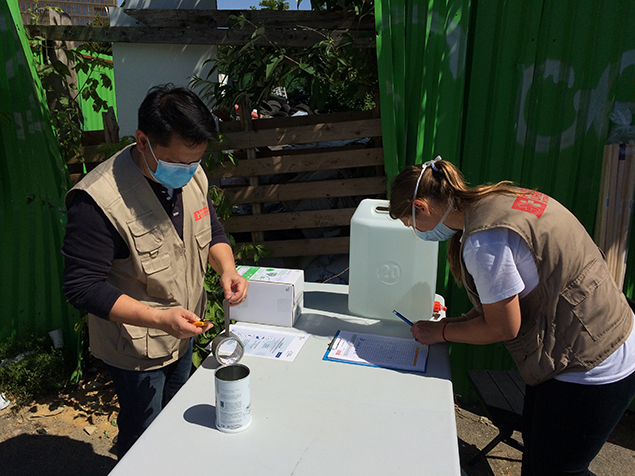 In parallel with these interventions for access to water, we also decided to intervene on the hygiene part, with the distribution of hygiene kits to deal with the transmission of COVID-19 and to protect by doing prevention. We know that this protection involves hand, body and surface hygiene. The town halls cannot act directly on this, but we can. 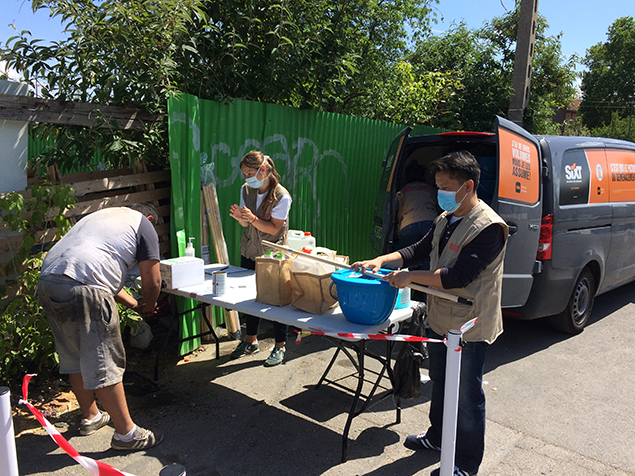 Last week, mid-May, we started distributing hygiene kits in the 4 squats of Val-de-Marne (94): 2 squats in Villejuif and 2 more in Sucy en Brie and Choisy le roi. So far, we have distributed 85 kits, for 271 people. 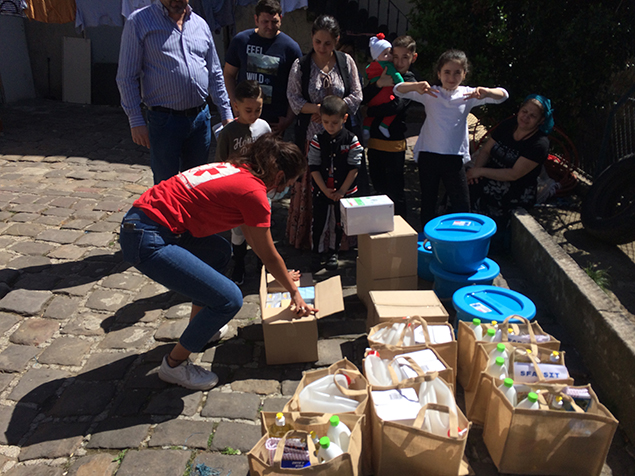 A kit is valid for a family of 5 people and it contains all the essential products of personal hygiene for two months: soap, toothbrushes, toothpaste, shampoo and sanitary napkins for women; as well as household cleaning products: garbage bags, sponges, washing up liquid, washing powder, gloves etc. If there are children under the age of 3 in families, a specific kit is added with diapers, wipes, washing gel for children and infants, baby toilet milk, etc.

Before and during the distribution, the team also inform people of the correct way to wash their hands. ”

On this emergency response to COVID-19, the NGO intervenes with the support of the Regional Health Agency the Sanofi Espoir Foundation, the Abbé Pierre Foundation and the association La Chaîne de l’Espoir.

[1] A slum, as defined by the United Nations Human Settlements Program, is the underprivileged part of a city characterized by very unsanitary housing, great poverty and without any land rights or security. The squat is specified by the fact that it is about the occupation of a room (and not of a ground), and that the residents do not have any contract, even if only oral.