By continuing to use this site, you agree to the use of cookies. Cookies are used to suggest information based on your browsing patterns and to provide us with information about site usage. For more information and to manage these settings, click here
Home > News > Making it work: Refugees in the land of the cedars

Making it work: Refugees in the land of the cedars

Discover in exclusivity our comic book: “Making it work: Refugees in the land of the cedars“.
In cooperation with the comics book collective of artists, The Ink Link and Première Urgence Internationale, the famous authors, Wilfrid Lupano and Pozla, scripted and illustrated this comic book to fight the prejudice existing around refugee populations in Lebanon. 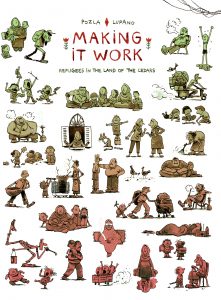 The situation of displaced Syrian populations remains a major humanitarian disaster today. Consequently, there are strong impacts on the refugees and on their host countries. The arrival of 1.5 million Syrians in Lebanon, posed a major challenge for the Lebanese health care system. Despite partial access to primary health care, Syrians who have found refuge in Lebanon face enormous economic and sociological barriers to integrate in this new country.

This comic book project has been made possible with the support from the European Union, through the EU Trust Fund in Response to the Syrian crisis. The project is part of a humanitarian health care program in Lebanon, entrusted to a consortium of NGOs led by International Medical Corps and of which Première Urgence Internationale is a member.