By continuing to use this site, you agree to the use of cookies. Cookies are used to suggest information based on your browsing patterns and to provide us with information about site usage. For more information and to manage these settings, click here
Home > News > « I felt as I arrived in a desert, not knowing anyone »

« I felt as I arrived in a desert, not knowing anyone »

Tarek and Hasna were born in the region of Hama in Syria. They have two children: Sarah and Mohammed. In 2011, the war broke out and the destiny of this family with it. Hasna shares with us their story. 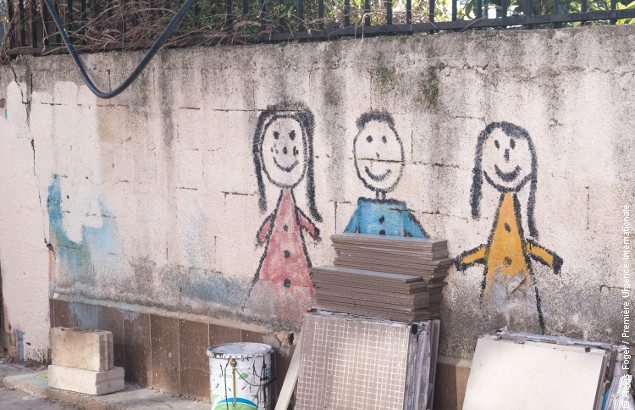 How was your life before the war ?

« Tarek and I used to live in Homs in Syria with our 2 kids. We had our own house and cultivated olives and vegetables in our field. Tarek was a taxi driver and I worked with my daughter as a hairdresser in a salon. Mohammed suffers from a childhood disability: he has a complete brain and body paralysis. Despite that, our lives were good. We had everything.

What happened to you when the war broke out?

When the war started, we stayed in our home as long as possible. One day, the city was bombed, it was panic. People were in fear and running in all directions. Mohammed was there with us, and the crazed crowded walked all over him. One of his leg and his two arms were broken. This was the turning point for us. My brother lives in Tyre, in South Lebanon, for years. We decided to leave Syria to join him. The four of us crossed the border with another hundred families and we reached Tyre.

How was the leaving conditions there?

We stayed 4 years in Tyre. My husband was working all kind of job, mostly in construction. It was not well paid but we managed as we could. My daughter Sarah delivered there. She was separated from her husband during the war. We never heard from him again since. One day, the bodies of Lebanese men who went to fight in Syria were returned. This kindled anger towards Syrian refugees. Out of fear, we decided to move.

Where did you go next?

We took a bus, not knowing where to go. We landed in Halba, in Northern Lebanon. I felt I arrived in a desert, not knowing anyone. We then met a man that offered us to live in a small garage, down of a two-flour building, with other Syrian families. It has now been 2 years since we live there. In the meantime, my husband found a job in Beirut thanks to an acquaintance of us, paid enough to cover our expenses.

Unfortunately, one day, he injured his leg at work and he had to be taken to the hospital where he was diagnosed with a more serious problem. His wound was treated but he needs knee surgery. I do not dare to look at the bill, so much I am afraid to see the amount. But in the meantime, Tarek walks with difficulty and he can no longer do physical work.

How did you manage financially?

When Tarek stopped working, we used all of our savings to pay for our daily expenses. We received some help from people from the mosque who knew our son is paralyzed. But soon, money ran out. We could not pay our rent anymore; we had debts from the shops and from the pharmacy. The landlord eventually lost his patience and told us that we had 10 days to pay him until he evicts us. I then called NGOs that are supporting Syrians in the area. After my call, members from Première Urgence Internationale came to our garage. One week after, we received a 400USD assistance. We gave the money directly to the landlord and our rent debt was cancelled.

What are you hoping next?

I started to work again, as I used to do back in Syria. By word of mouth, I now have some Syrian customers that come to see me at home to get their hair done, especially before weddings for example. But my dream is that a djinn comes to us and takes us all back to Syria. Recently, we received a photo of our house in Homs. The doors and windows have been stolen along with most of the furniture but the house has not been bombed. When we will go back, we will start our life again. And I will plant vegetables in my garden.”

The mentioned names have been changed to protect the families’ identity.

Click here to learn more about our actions in Lebanon.

The activity was supported by the Bureau of Population, Refugees and Migration (BPRM).